Guam wakes to another pointed threat from North Korea 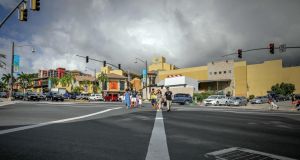 People walk across an intersection in the city of Tamuning on the island of Guam on Thursday. Photograph: Robert Tenorio/AFP/Getty Images

The tiny US territory of Guam feels a strong sense of patriotism and confidence in the American military, which has an enormous presence on the Pacific island.

But residents are increasingly worried over Washington’s escalating war of words with North Korea.

The people of Guam woke up on Thursday to another pointed threat from Pyongyang, which vowed to complete a plan to attack waters near the island by mid-August – adding a timeline to a threat from a day earlier that North Korea would create an “enveloping fire” around Guam.

Like other US territories, Guam has a sometimes complicated relationship with the US mainland, but many across the island say that despite the threats and concerns, they feel reassured and protected by the military – especially in times of tense, geopolitical sparring.

About 160,000 people live on the island, which extends about 19km at its widest.

The American military presence on Guam consists of two bases – Andersen air force base in the north and naval base Guam in the south – which are home to 7,000 US troops.

“I feel that the presence of the military on Guam will help us a lot,” said Virgie Matson (51), a resident of Dededo, Guam’s most populated village. “They are here to protect the islands, just in case something happens.”

The possibility of a nuclear confrontation is considered remote but international alarm has been escalating in recent days.

In the latest development, Gen Kim Rak Gyom, who heads North Korea’s rocket command, said in a statement carried by state media that his country was “about to take” military action near Guam. He said the North would finalise a plan by mid-August to fire four mid-range missiles hitting waters 30 to 40 km away from the island.

It is not the first time North Korea has threatened Guam, which is a crucial strategic hub for US forces in the Pacific.

Andersen air force base houses a navy helicopter squadron and air force bombers that rotate to Guam from the US mainland, including the B-2 stealth bomber, B-1 and B-52. Their location in a US territory means its military is just hours from potential flashpoints in the western Pacific.

Naval base Guam is an important outpost for US fast-attack nuclear powered submarines that are a key means for gathering intelligence in the region, including off the Korean peninsula and in the South China Sea where China has been building military bases on man-made islands that have stirred tension across Asia.

The US military has said it plans to increase its presence on Guam and will move thousands of US marines currently stationed in Japan to the island between 2024 and 2028. “I’m pro military buildup,” said resident Gus Aflague (60), whose grandfather and brother both joined the US navy.

“North Korea has always threatened other countries. They threatened US, other countries, and they threaten Guam. It’s a propaganda, that’s how I feel,” he said, but added that the military offered an extra reassurance. “I feel safe with our military presence here – Andersen and the navy.”

There is a sense of patriotism among those who cite the island’s history of Guam residents serving in the US military.

The US took control of Guam in 1898, when Spanish authorities surrendered to the US navy. During the Vietnam War, the air force sent 155 B-52 bombers to Guam to hit targets in South East Asia.

Guam was also a refuelling and transfer spot for people heading to South East Asia, and many refugees fleeing Saigon were evacuated through Guam. But there is also some resentment about not being able to vote in the general election for US president.

Guamanians have served in all major US wars since the second World War and see military service as a source of pride. A huge red, white and blue ribbon is outside the airport terminal.

Resident Isaac Camacho (19), said he feels Guam’s relationship with the US mainland is “a little misunderstood on their part”.

“They believe that we are not true US citizens, when we do have plenty of Chamorro people going into the US military and serving for their country and dying for their country,” he said. Chamorros are the indigenous people of Guam. “And not a lot of Americans know that,” he added.

Guam is about 3,380km south-east of Pyongyang and 6,115km west of Honolulu in the Pacific Ocean.

For years, North Korea has claimed Guam is within its missiles’ striking distance, making furious statements each time the US flew powerful bombers from the island’s air base to the Korean Peninsula.

In August last year, the North’s foreign ministry warned that all US military bases in the Pacific including Guam would “face ruin in the face of all-out and substantial attack” by the North’s military.

In 2013, state media cited leader Kim Jong Un as having ordered his military to prepare plans on launching strikes on US military bases in Guam, Hawaii and South Korea as well as the American mainland.

Guam is armed with the US army’s defence system known as Terminal High Altitude Area Defence, which can intercept missiles.