Free movement between EU and Britain ‘to end’ in March 2019 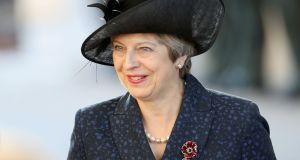 Free movement from the European Union into Britain will end in March 2019, Downing Street has said. The announcement comes as Theresa May attempts to contain a row in her cabinet over Brexit. Photograph: Chris Jackson/PA Wire.

Free movement of people from the European Union will end in March 2019 when Britain leaves the bloc, UK prime minister Theresa May’s spokesman said on Monday, after Tory ministers gave a range of conflicting views about the Brexit divorce.

The announcement will not come as welcome news in Leinster House, with Taoiseach Leo Varadkar recently criticising the UK’s approach to the Brexit negotiations.

Since Ms May lost her parliamentary majority in a June election, divisions between her ministers over Brexit strategy have broken into the open, with an intense public debate in recent days while Ms May has been away on holiday.

Last week, finance minister Philip Hammond said there should be no immediate change to immigration rules when Britain leaves the bloc, and interior minister Amber Rudd said there would be no “cliff edge” on leaving the EU.

However, trade minister Liam Fox said that allowing free movement after Brexit would not “keep faith” with the referendum result, and that the British government had not reached a consensus on keeping open EU immigration for a transitional period.

“Free movement will end in March 2019,” Ms May’s spokesman told reporters on Monday, adding that the government had already set out some details including proposals on EU citizens rights post-Brexit.

“Other elements of the post-Brexit immigration system will be brought forward in due course. It would be wrong to speculate on what these might look like or to suggest that free movement will continue as it is now.”

Concerns over immigration were a key driver behind last year’s vote to leave the EU, and government has for years failed to meet a pledge to reduce net migration below 100,000 a year.

On Monday, Mr Hammond was also reported as saying Britain does not intend to lower taxes far below the European average in order to remain competitive after Brexit, contradicting comments he himself had made earlier in the year.

Ms May’s spokesman said there was broad agreement across government and within her team of ministers about the need to make Brexit as smooth as possible. The government position on Brexit remains as set out by May in a January speech, he added.

He cited comments from that speech in which Ms May said that it was “in no one’s interests for there to be a cliff edge for business”, but that this did not mean seeking “some form of unlimited transitional status”.

The Financial Times reported last week that Ms Hammond hoped for an “off-the-shelf” transition deal with the EU that would preserve existing trading arrangements for at least two years, followed by a further implementation phase.

“We are not looking for an ‘off-the-shelf model’, but the precise details of what an implementation period looks like are for the negotiation,” Ms May’s spokesman said.