Namibia rejects €10m from Germany as apology for genocide 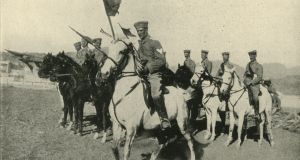 German troops in southwest Africa in 1914. Namibia was a German colony between 1884 and 1915. Photograph: The Print Collector via Getty Images

Namibia has rejected €10 million in development aid from its former coloniser Germany, as an apology for a genocide carried out more than a century ago, with its president saying the offer is not enough.

The genocide took place between 1904 and 1908, when German troops killed as many as 100,000 of the Herero and Nama people after they rebelled against colonial rule, according to historians. German settlers had already been claiming land and cattle as their own, and using Namibians as slave labourers.

Namibia was a German colony between 1884 and 1915, after which it was controlled by South Africa, before becoming independent in 1990.

German and Namibian officials have participated in eight rounds of talks on this issue since 2015. One major point in dispute is the terminology used to refer to the payments. Namibia said it is “inadequate” that Germany would not call it “reparations”, saying that the German government wants to call it “healing the wounds” money instead.

President Hage Geingob said he is still satisfied with the progress of negotiations and hopes a final agreement can be reached soon.

Namibian Mike Uta (34) told The Irish Times his great-grandparents survived the genocide by fleeing to Botswana, where they lived as refugees. He said Hereros and Namas are still displaced and impoverished. Their land, which was one of the richest parts of Namibia in terms of natural resources, was taken from them, and they have since been greatly underrepresented in government, meaning they have little power. More than 100 years later, “they are still just trying to find themselves, re-establish”, he said.

Mr Uta said if an agreement is reached, Hereros don’t want Germany to put the money in the hands of Namibia’s government, “because they won’t distribute it fairly”.

There have been other incidents of European colonial powers paying compensation for historic abuses in Africa.

In 2013, then British foreign secretary William Hague announced the United Kingdom would pay almost £20 million pounds (€22 million) to 5,228 Kenyans who were tortured by British colonial forces during the Mau Mau uprising in the 1950s, as well as contributing towards the construction of a memorial in Nairobi. Despite this, the UK refused to accept legal liability.

Thousands of people were killed during the Mau Mau uprising. A further legal challenge by lawyers representing 40,000 more Kenyans failed, while other legal challenges, about the treatment of Kenya’s Kipsigis and Talai peoples by the British, are ongoing.

In June, after Belgium’s King Philippe apologised to the Democratic Republic of the Congo for “acts of violence and cruelty” carried out while it was a Belgian colony, activists also called for reparations.