Coronavirus: How Germany dealt with a meat plant outbreak 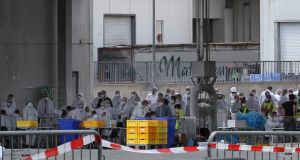 Workers get tested at the Tönnies meat plant in Gütersloh in June. Photograph: Deeke/Bundeswehr via Getty

Eight weeks ago, the world ground to a halt in Gütersloh. The summer holidays were about to begin in the Westphalia region when a fifth of the 6,500 workers at a local meat plant, Germany’s largest, tested positive for the virus.

With echoes of recent developments in Kildare, Offaly and Laois, a massive Covid-19 outbreak at the Tönnies facility forced the entire region into lockdown.

For the 370,000 people who live here, that meant holiday plans evaporated. All gatherings were cancelled, bars and restaurants closed again and long queues formed at testing centres.

As teams fanned out to test workers and families, up to 14,000 people were placed in quarantine and provided with food and supplies by local volunteers who rallied together in the crisis.

“It was a huge disappointment, just as people hoped things were getting better,” said Dr Christine Disselkamp, deputy district administrator for Gütersloh. She said local feelings were running high: farmers were frustrated at being unable to sell their animals; parents worried about their children getting sick.

“But most people accept the limitations to prevent even more people getting infected,” she said.

Two months on, there are still 65 cases of Covid-19 in the region that has lost 20 people to the virus. The current infection rate is still three times the permitted level, meaning tighter restrictions are in place here than elsewhere.

But local officials say the town is working with local meat plant owners to rebuild trust and learn lessons of what caused the lockdown – at practical, political and scientific levels.

Last Monday evening, Gütersloh medical experts presented county councillors with a new “multi-barrier” strategy for plants – what Dr Disselkamp describes as “the best security that one can guarantee at the moment”.

Elements of this plan include surgery-quality masks for all meat plant employees and plexiglass screens in areas where additional distance is not possible between workers.

German scientists have issued a preliminary study based on a smaller outbreak in May in the same plant in Germany’s meat-processing heartland. Researchers found that a collision of factors unique to meat plants made them an ideal ground for so-called super-spreader events.

One key factor is the nature of slaughterhouse work: the outbreak took place in a beef-deboning area with heavy physical labour in a loud room, requiring workers shout to be understood.

A second factor was the plant’s closed ventilation system which cooled recycled air – with neither air filters nor fresh air from outside.

The most eye-catching result, however, was how the steady temperature of 10 degrees was ideal for aerosol transmission – virus spread through tiny solid or liquid particles in the air. In the Tönnies plant, researchers calculated virus transmissions over distances of up to eight metres.

“The eight metres didn’t surprise me as such,” said Prof Adam Grundhoff, a co-author of the study. “We’ve had a long scientific discussion about whether Covid-19 transmission takes place through aerosol transmission. In conditions that you find in a meat processing plant, it is to be expected. What was interesting was, with this data, to be able to confirm it.”

While analysis of the virus transmitted between workers showed it was the same mutation, cross-referencing workers’ positions at the conveyor belt with shift data allowed Prof Grundhoff and his team see “with high probability how those who worked closely to this person were also infected”.

Crucially, their study showed no noticeable after-hours spikes, once workers were outside the unique conditions of the deboning hall.

“Put another way,” said Prof Grundhoff, “the early clusters would have happened without the shared worker accommodation.”

After more than a decade of sporadic debate about the high cost of cheap meat, the Tönnies Covid-19 outbreak has become a catalyst for change.

About half of 6,500 Tönnies workers were reportedly hired by subcontractors and about 80 per cent are non-German nationals. That reflected a wider trend in an industry that engages 130,000 in 1,500 plants largely through agencies.

German federal labour minister Hubertus Heil attacked these “dubious” structures as the “root of evil” in the industry, driving down salaries and leaving workers with negligible rights.

He brought forward laws, scheduled to go into effect next year, forcing meat plants to employ workers directly – at regular industry conditions – or face fines of up to €30,000.

State officials say firms are now pre-empting new health measures. Though no reliable scientific data exists for them to demand firms introduce a particular standard of air filters in meat plants, they report that Tönnies has introduced new hospital-grade air filters into its ventilation systems.

A new rule bans plants allowing in workers who haven’t been tested – at company expenses – in the previous 10 days for Covid-19. Even before the tests were mandatory, officials say companies had already imposed their own test regime.

“No firm wants a plant sitting idle for two weeks because it was closed down by the authorities,” said Mr Oliver Grimm, spokesman for the Lower Saxony state health ministry. “This Sword of Damocles is far more effective than any regulation which can be imposed. You can’t see into every plant everywhere, at all times, that’s just the way it is.”

After Volkswagen, Lower Saxony’s second most important sector is agriculture – employing every 10th person. (The northern end of the state towards the North Sea is dairy farming; the southern end is grain and vegetables – some 45 per cent of German potatoes are harvested here.) Its western regions are dedicated to intensive meat and poultry production. Every third pig and two-thirds of all chickens in Germany originate from just three counties here, near the Dutch border. Lower Saxony is also a meat processing heartland: last year some 600,000 cattle and nearly 18 million pigs were slaughtered and processed here at facilities owned by a small number of companies.

Leading producer is the family-run firm Tönnies, which controls about a third of the meat market and supplies own-label products to almost all of Germany’s supermarket chains. Other processing firms besides Tönnies are battling their own Covid-19 outbreaks. News of a poultry plant outbreak in the western city of Vechta, with 66 cases out of 1,046 employees, has seen the local infection rate jump to 10 times the permitted level.