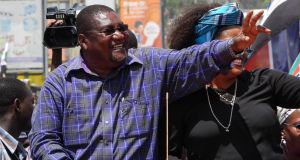 The murder last week of an election observer in Mozambique has cast a “dark shadow” over the country’s general election, according to rights groups, which say violence has escalated dramatically in the run-up to Tuesday’s ballot.

Anastacio Matavele, the head of Sala da Paz, a coalition of local election observer bodies, was shot dead on October 7th as he drove away from a training workshop in Xai-Xai, a ruling party stronghold and the capital of the southeastern Gaza Province.

The 58 year old’s five assailants were involved in a deadly traffic accident as they made their escape, and three survivors were arrested at the scene. Mozambican police subsequently confirmed that four members of one of its elite units were involved in Matavele’s assassination.

Mozambique’s presidential election sees the ruling Frelimo party’s leader, Filipe Nyusi, seeking a second term as the country’s president. He is up against Ossufo Momade, the new leader of the main opposition party, Renamo, and two other candidates.

The country’s 13 million voters will also choose from 26 parties contesting the national and provincial elections. The latter poll sees voters elect provincial governors for the first time, a move designed to ease political tensions in a country ruled solely by Frelimo since independence from Portugal was secured in 1975.

Analysts believe Renamo could gain control of between three to five of the country’s 10 provinces, as Frelimo’s popularity has been dented by major corruption scandals in recent years. Last year Frelimo posted its worst-ever election performance, winning just 51.8 per cent of votes in the municipal polls.

Nevertheless, Nyusi is widely expected to be re-elected as president on Tuesday as Momade’s campaign has been undermined by logistical problems and party infighting linked to the death in May of long-standing Renamo leader Afonso Dhlakama.

Under Momade’s leadership, Renamo signed a peace deal with the government on August 6th that was designed to facilitate peaceful elections by bringing an end to a low-intensity guerilla war the party’s military wing has waged against the state since 2013.

However, the animosity that exists between Mozambique’s two largest parties stretches back to the country’s brutal civil war, which Frelimo and Renamo waged against each other until a ceasefire was secured in 1992. Up to one million people died in nearly two decades of fighting.

Despite the new accord, the campaigning period leading up to Mozambique’s general election has witnessed widespread violence that has been attributed to supporters of both Frelimo and Renamo as well as Islamist extremists.

Mozambique’s local election observer coalition has accused Frelimo supporters of stopping Renamo campaign rallies from going ahead, burning the homes of the party’s prominent members and physically attacking them.

Sala da Paz (“Peace Room” in English) has said on its Facebook page that Matavele’s murder confirms that Mozambique is “witnessing one of the most violent electoral campaigns” since the turn of the century.

Human Rights Watch maintains the attack on Matavele is not an isolated incident, as it has documented numerous cases of abuses and election-related violence across the country since campaigning got under way.

The rights group’s Mozambique researcher, Zenaida Machado, told The Irish Times the election violence had escalated since it began on August 31st when supporters of Frelimo and Renamo clashed on the campaign trial in Gaza Province.

“The attacks are not being perpetrated by supporters of just one party. It is widespread and involves people from different groups,” said Machado. “Political leaders are blaming each other rather than denouncing the violence. We expect them to call for an end to the hostilities, but we are not seeing them clearly do this.”

August’s peace deal required up to 5,000 Renamo fighters to surrender their arms and return to civilian life with financial help, or to join the police and army.

However, shortly after the deal was signed a breakaway faction calling itself the Renamo Military Junta said it would not allow elections to go ahead. This splinter group has claimed responsibility for several election-related attacks over the past month.

Additional trouble has been brewing in the north of the country, where the government is battling an Islamist extremist insurgency in the resource-rich Cabo Delgado province that has resulted in up to 200 civilian deaths since 2017.

According to the Mozambique Election Process Bulletin, a newsletter covering the poll that is sponsored by the European Union and other donors, 44 people have reportedly been killed in election-related incidents since September 1st. However, most of these deaths were in traffic accidents.

In total, seven election-related murders and 271 assaults have been reported, the bulletin stated in its October 12th report.