A paraglider, sporting the Catalan flag, flies over a prison where nine Catalan leaders are being held. They were sentenced to prison terms of up to 13 years for sedition and other offenses after a failed independence bid in 2017. Video: Reuters 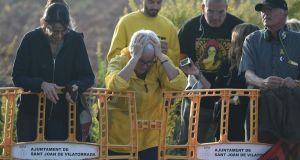 Spain’s supreme court on Monday sentenced nine Catalan independence leaders to between nine and 13 years in prison for sedition over their role in a failed independence bid, triggering protests across the region.

Three other defendants, who were also on trial for their involvement in the October 2017 referendum, held in spite of a ban, and a short-lived independence declaration, were found guilty only of disobedience and not sentenced to prison.

All defendants were acquitted of the gravest charge, rebellion, but leading separatists were quick to condemn the court’s decision and the jailed men sent out messages of defiance, urging people to take to the streets.

“This sentence is an attack on democracy and the rights of all citizens,” the head of the regional parliament Roger Torrent said. “Today we are all convicted, not just 12 people.”

The former head of Catalonia’s regional government, Carles Puigdemont, said the prison sentences were an “atrocity.”

In Barcelona, three main streets were blocked by protesters holding signs calling for “Freedom for political prisoners” and a crowd chanted “We’ll do it again” – a slogan used by separatist supporters who want to hold another referendum.

Protesters blocked train and metro access to the Barcelona airport and others temporarily halted traffic on the A2 highway, as well as on several regional roads across Catalonia, officials at the road traffic agency said.

The regional train network was interrupted in the separatist stronghold of Girona by people standing on the tracks, wrapped in pro-independence flags.

The ruling and its fallout is likely to colour a national election on November 10th, Spain’s fourth in four years, and influence the direction taken by the separatist movement.

The jailed separatists said via social media that they would carry on their fight.

“Nine years in prison won’t end my optimism. Catalonia will be independent if we persist. Let us demonstrate without fear, let us move forward determinedly from non-violence to freedom,” said Jordi Sànchez, who was sentenced to nine years in jail. Sànchez was the leader of the Catalan National Assembly (ANC) grassroots movement.

Protests for Catalonia’s independence have been largely peaceful over the past years but police sources have said authorities are prepared for any violence.

Catalon president Quim Torra called for an amnesty for all 12 leaders and said he would seek an urgent meeting with Spain’s King Felipe VI and acting prime minister Pedro Sánchez. However, Mr Torra stopped short of repeating past weeks’ calls for civil disobedience.

Mr Sánchez was quick to rebuff the demand for an amnesty, saying the sentences must be carried out.

“Today’s decision confirms the defeat of a movement that failed to gain internal support and international recognition,” he said in a televised address to the nation. He also called for dialogue, saying now was time for a new chapter over the Catalan issue.

The longest prison term – 13 years – was handed down to the former deputy leader of the Catalan regional government, Oriol Junqueras.

The court convicted Junqueras and eight other leaders on charges of sedition and four of them of misuse of public funds, the court ruling showed.

“What happened on October 1st was not just a demonstration or a massive act of citizen protest. If that had been the case, there would have been no criminal sentencing. It was a tumultuous uprising encouraged by the accused, among many others,” the Madrid court said in its ruling, delivered in writing rather than in an open session.

After the ruling was published, the CDR grassroots movement called on protesters to block Barcelona’s airport, tweeting: “It’s time to rise up against the authoritarian fascism of the Spanish state and its accomplices. It is time for the #RevoltaPopular [popular revolt].”

The supreme court also issued an European arrest warrant for Mr Puigdemont. Mr Puigdemont was the head of the Spanish region during its failed bid to break away from Spain. He now lives in self-imposed exile in Belgium. In July 2018, the Spanish court dropped a warrant after Germany refused to extradite him.

The government has said it was ready to take direct control of Catalonia as it did in 2017 if secessionist leaders break the law.

An opinion poll in July showed 48.3 per cent of Catalans against secession and 44 per cebt in favour. – Reuters