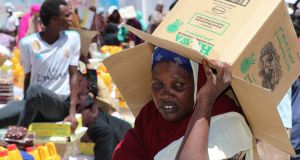 A woman shades her head from the heat of the sun during food distribution in Mogadishu’s Shingani district in Somalia. Photograph: Abdirazak Hussein Farah/AFP/Getty Images

Climate-change-related drought in Somalia could put 2.2 million people at risk of starvation this year, according to the United Nations.

Justin Brady, UN Office for the Co-ordination of Humanitarian Affairs head for Somalia, told The Irish Times that the international community should be “very worried”.

“We came into the year with 1.5 million in crisis. We expect this optimistically to grow to 2.2 million people,” he said.

“You’re talking about people on a daily basis who are not sure if they’re going to secure not three meals a day, [but] one meal a day – these are people who are heading towards starvation, that’s the next step for some of them. And what they are getting is insufficient, both in terms of calories and vitamins.”

Mr Brady said the latest drought had come “out of the blue”, and badly affected farmers who rely on rain to grow crops.

“We had a forecast as recently as February of an average rainy season, which meant there’s the possibility of improvement. Cyclone Idai, and two other cyclones right behind it, that low pressure system retarded the rains from moving north.”

Cyclone Idai made landfall in southeast Africa in March, leading to more than 1,000 deaths in Mozambique, Malawi, and Zimbabwe, affecting millions of people, and causing catastrophic damage to homes and infrastructure.

Werner Schultink, Somalia’s Unicef representative, said Somalia too is becoming increasingly vulnerable to the effects of climate change. “Once again, we are seeing the potentially deadly consequences of drought in Somalia. The recent lack of rainfall comes after two consecutive poor rainy seasons, and this quarter ranks as the top third driest since records began in 1981.”

Among those affected could be more than 1.1 million children, he said.

“Children are always among the most vulnerable to drought, with malnutrition, drought-related diseases and displacement on the rise. Displacement, combined with a lack of safe drinking water and sanitation services, also raises the risk easily preventable diseases and outbreaks are common. The potential increase of measles cases is a huge concern.”

Somalia has a mortality rate that is twice the sub-Saharan African average, according to Mr Brady. Humanitarian organisations have challenges in getting access to some areas because of the al-Qaeda-aligned al-Shabaab militant group.

A famine was declared in Somalia in 2011, leading to the deaths of 258,000 people. “There’s a lot more access now, better systems, there’s a government in place,” said Mr Brady.

However, he said that doesn’t mean the drought shouldn’t be taken seriously. “There is no doubt in my mind that there are people who have perished already, the question is whether we’re going to hit a tipping point where the number of deaths a day mean we start talking about a famine,” said Mr Brady.

Almost 60,000 Somalis have been forced to move this year to try to find food, Mr Brady said.

In 2017, during the last major drought, 1 million Somalis were displaced. “A lot of that is women and children leaving villages and going to places they hope they can procure assistance,” said Mr Brady.