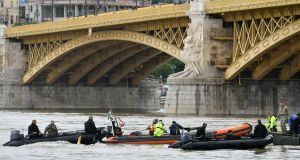 Rescuers in boats at work following the collision between a pleasure boat and cruise ship on the Danube river. Photograph: AP

Hungarian police late on Thursday said they had taken into custody the captain of a cruise ship involved in a collision on the Danube River in central Budapest that killed at least seven South Korean tourists on Wednesday.

The captain is a 64-year-old Ukrainian citizen identified as C Yury, from Odessa, whose arrest was initiated for reckless misconduct in waterborne traffic leading to mass casualties, according to police

Hopes are also fading for 21 other people missing when the pleasure boat collided with a river cruise ship and sank in the Danube in Budapest.

Another seven South Koreans were rescued after the accident, which happened in heavy rain on Wednesday night, but 19 of their compatriots and two Hungarian crew members were missing on Thursday evening despite search efforts along the fast flowing and storm-swelled river.

South Korean foreign minister Kang Kyung-wha was expected to arrive in Budapest on Friday with a rescue team from Seoul, but Hungarian emergency workers downplayed the possibility of finding any more survivors.

“I am not inclined to say there is no hope, so I would rather say there is a minimal chance,” Hungarian ambulance service spokesman Pal Gyorfi told national television.

“This is not just because of the water temperature, but the strong currents in the river, the vapour above the water surface, as well as the clothes worn by the people who fell in.”

Hungarian police colonel Adrian Pal said a criminal investigation had been launched into why the 67m (220ft) Hableany (Mermaid) tour boat collided with the 135m Viking Sigyn cruiser at the end of an hour-long sightseeing trip in central Budapest.

“Both ships were heading north . . . and when they arrived between two pillars of the Margit Bridge. For some reason the Hableany turned in front of the Viking ship. As the Viking comes into contact with it, it overturns it and in about seven seconds, as it turned on its side, it sank,” Col Pal told reporters.

“We have found the wreckage with a sonar . . . we are looking at ways to extract it from the river,” he added. “At this point we cannot confirm or deny whether there are any bodies trapped inside the hull.”

Police and rescue boats plied the Danube close to Margit bridge. But for most of Thursday the current was too strong for divers to descend to the wreck, through murky water awash with branches and other debris swept in by recent bad weather.

Col Pal said search operations along the Danube had been extended downstream into neighbouring Serbia and Hungarian media reported that one survivor was found about some 3km from the site of the sinking.

“They were struggling to stay afloat and shouting for help, but I was unable to do anything,” a survivor identified as Chung (31) told South Korea’s Yonhap news agency. “As they were being swept away in fast currents, there was no help coming to the scene.”

A woman named Lim (82) told the country’s JoongAng Ilbo newspaper: “My son-in-law and my daughter are among the missing . . . they went with other couples whom they know through their high school alumni group. I wished them well on their trip, but I didn’t know that was to be our last goodbye.”

Ginger Brinton (66), a US tourist on the Sigyn, told the AFP news agency: “We were on our balcony, and we saw people in the water, screaming for help. We never felt any bump . . . It was just terrible.” – Additional reporting Reuters