Ayatollah says Iran will not submit to Trump demands 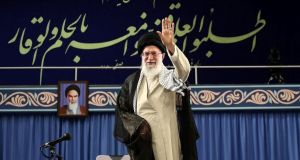 Iran has said it will not submit to Trump administration demands to negotiate over its nuclear and missile programmes, its revolutionary ethos and armed forces.

“We said before that we will not negotiate with America, because negotiation has no benefit and carries harm,” supreme leader Ayatollah Ali Khamenei said on Wednesday.

A former supporter of the 2015 deal, Khamenei’s words reflected deep Iranian disappointment over its failure to deliver sanctions relief in return for dismantling nuclear facilities.

His statement was in response to calls by US president Donald Trump for talks on a new deal and a statement by president Hassan Rouhani that Iran could agree. “Whenever they lift unjust sanctions, fulfil their commitments and return to the negotiating table, which they left,” Rouhani said.

But Khamenei is the ultimate arbiter in Iran’s system of governance. His words amount to a rejection of a dozen demands put forward by US secretary of state Mike Pompeo, who had called on Iran, inter alia, to cease all uranium enrichment, provide UN inspectors with access to all Iran’s nuclear and military sites, and end ballistic missile production.

Iran regards these demands as hostile intrusions into its domestic and foreign affairs. While the US argues Iran’s regional behaviour is “malign”, Tehran contends that pro-Iranian forces, including Hizbullah, have fought Islamic State and other jihadi groups in Iraq and Syria.

US Gulf experts say Iran’s support for the Houthis is marginal and cannot be compared with arms supplies and logistics aid provided by the US, UK and France to the Saudi-led coalition fighting in Yemen.

With the aim of defusing tensions, Iranian foreign minister Javad Zarif has insisted that “we’re not seeking nuclear weapons”, pointing out that Khamenei issued a “fatwa” banning them. During discussions in Baghdad, his Iraqi counterpart, Mohamed Ali al-Hakim, offered to mediate with the US.

Zarif made clear that Tehran is determined to counter all “efflorts to launch a war against Iran, whether it is a military war or an economic war on Iran’s people” by means of punitive sanctions. He said that Iran “wants to have the best possible relations with all [its] neighbours in the Persian Gulf region” and proposed a non-aggression pact.

Zarif’s deputy Abbas Araghchi travelled to Qatar, Oman and Kuwait, where he put forward the pact idea. He had previously met in Tehran with Russian deputy foreign minister Sergei Ryabkov, who said that Moscow has urged the nuclear deal’s arbitral commission to hear Iran’s complaints.

Araghchi earlier told German envoy Jens Plötner that remaining signatories of the nuclear agreement must honour their obligations despite US withdrawal.

On May 8th, Iran gave these countries – Germany, France, Britain, China and Russia – 60 days to implement pledges to protect its oil and banking sectors from US sanctions and threatened to scale down implementation of its commitments if they fail to provide relief.