Netanyahu could be facing biggest challenge to date

Analysis: Pressure grows over failure to form a government and charges of bribery, fraud 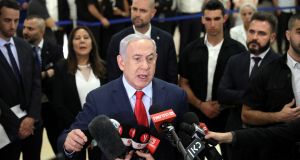 In the early hours of April 10th, when Israeli prime minister Binyamin Netanyahu addressed the Likud faithful following (yet another) impressive election victory, he had the aura of invincibility.

“He’s a magician,” the adoring Likudniks sang, in praise of King Bibi.

Yes, difficult coalition negotiations lay ahead, but that’s always the case in Israel and every politician tasked with forming the government after an election has eventually succeeded in cobbling together a working coalition. No one had any doubt that another right-wing/religious, Netanyahu-led government would be formed in a few weeks.

Fast-forward 51 days and Bibi looks anything but invincible.

Not only did Israel’s most wily politician fail to form a coalition but he was forced to fast-track legislation for a snap election in the autumn to prevent President Reuven Rivlin from asking another politician to form a government.

The chosen candidate could have been another Likud Knesset member or the leader of the centrist Blue and White, Benny Gantz – both nightmare scenarios in Netanyahu’s paranoid worldview where the left, the media and the judiciary are engaged in a campaign to oust him from power.

Even more problematic for Netanyahu is the fact that failing to form a government means he faces a judicial hearing on charges of bribery, fraud, and breach of trust just a couple of weeks after the September 17th election. This means that he will probably have to ditch plans for an Immunity Bill, backed by all the coalition parties, that would have prevented him from standing trial while he remains a Knesset member.

So Netanyahu faces another election with his image severely tarnished. If he is such a political genius, commentators are asking, why didn’t he realise earlier that Avigdor Lieberman and his Yisrael Beiteinu party would not be joining the coalition and come up with a Plan B?

The polls in the coming weeks will show the extent of the electoral damage, if any.

Likud politicians are pushing the line that the lesson of this sad episode is for right-wing voters to vote only for the Likud and not the smaller right-wing parties.

Until now Netanyahu’s base has remained remarkably firm and even the corruption allegations failed to dent his genuine popularity amongst many Israelis. Bouncing back after Wednesday night’s fiasco in the Knesset could be Netanyahu’s biggest challenge to date.