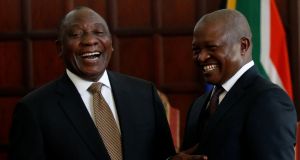 South Africa’s president Cyril Ramaphosa has slashed the size of his new cabinet, reducing it from 36 to 28 ministries as part of his plans to streamline government.

Unveiling the eagerly anticipated executive on Wednesday evening, Mr Ramaphosa also ensured a gender balance was achieved at ministerial level for the first time in South Africa’s history, with half of the 28 posts going to women.

Mr Ramaphosa, who was reappointed president last week after the African National Congress (ANC) party won the May 8th general election with a reduced majority, faced significant pressure to appoint a cabinet that did not include people tainted by allegations of corruption or incompetence.

While he achieved this to some degree, his appointments suggest that realpolitik played a central role in his choices.

Reaction to the cabinet has been mixed so far, with opposition parties calling it an insult to South Africans and far from the “new dawn” Mr Ramaphosa promised.

However, big business and the markets appeared broadly supportive of the appointments made to the most powerful ministries. The rand gained 0.5 per cent against the US dollar on Wednesday in the hours following the announcement.

Analysts have put this gain down to the reappointment of Tito Mboweni as finance minister and Pravin Gordhan as minister of public enterprises, which they say suggests that tackling corruption and incompetence at state-run enterprises will continue.

Most of the corruption-tainted ministers from former president Jacob Zuma’s cabinet did not make the cut. But it appears as though some scandal-prone individuals, including some of Mr Ramaphosa’s allies, were appointed to ensure party unity.

For instance, Mr Ramaphosa reappointed deputy president David Mabuza, whose support was crucial to his victory at the ANC’s elective conference in 2017, even though he is accused of ordering political killings and of tender fraud while premier of Mpumalanga Province.

Mr Mabuza has never been charged in relation to the allegations. He was cleared of wrongdoing by the ANC’s integrity committee prior to being sworn in as a member of parliament last Friday.

A surprise addition to the cabinet was Nkosazana Dlamini-Zuma, Mr Zuma’s ex-wife and Mr Ramaphosa’s main rival for the ANC presidency in 2017, who was appointed minister for co-operative governance and traditional affairs.

South Africa’s fifth president in the post-apartheid era has warned his new colleagues that an awful lot is expected of them over the coming years, and he suggested if they were not up to their tasks they will not last long in their posts.

“Their [the new ministers and their deputies] performance – individually and collectively – will be closely monitored against specific outcomes,” he said after the appointments, adding: “Where implementation is unsatisfactory, action will be taken.”