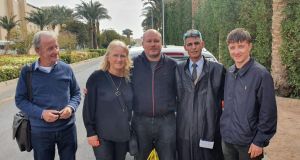 Tony Camoccio (C) has been released from custody in Egypt. Photograph: Family handout/Detained in Dubai/PA Wire

A British man who was arrested in Egypt for reportedly “patting” a male airport security guard on the back has been released, a campaign group said.

Supporters of London businessman Tony Camoccio (51) feared he would be falsely accused of sexual assault after the alleged incident at Hurghada International Airport on February 8th.

But campaign group Detained in Dubai said on Saturday that Mr Camoccio had now been released from Egyptian custody after paying about £1,000 (about €1,205) in bail and other related costs.

Detained in Dubai chief executive Radha Stirling said: “The case has been dismissed for lack of evidence, and Tony will be flying home to the UK on the next available flight from Cairo.

“While the charges were clearly without merit, we have to emphasise that had British authorities and the international press not paid attention to this case, there is no reason to believe that Tony would be a free man today.”

Mr Camoccio, who has visited Egypt several times, was at the end of a holiday with his wife and a large group of friends when the incident is said to have happened at an airport checkpoint.

More than 5,000 people had by Saturday signed an online petition calling for him to be released.

Mr Camoccio said: “I’m very excited to be heading home and can’t wait to see all of my family and rest after the past week’s events.

“I’m very thankful to everyone for their support, my friends and family, my lawyer Elezab Ali Elezab, John Kenny from the consulate and Radha Stirling, who have done their best to get me home.”

A statement on the petition website reads: “At customs in Hurghada airport on his outbound journey, he [Mr Camoccio] was at [the] final checkpoint where he was, as a standard procedure for all outbound passengers, patted down by a security officer.

“Tony then gently patted the officer’s back, and is now facing serious accusations.

“He was held in a general population cell overnight where he remained in handcuffs petrified for his life as he did not know what he was supposedly being charged with or what he had done wrong.”

It is understood that Mr Camoccio is due to fly home on Sunday. – PA