Angela Merkel’s successor as CDU party leader to stand down 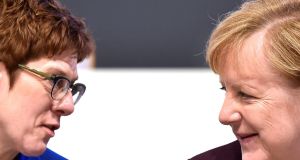 Annegret Kramp-Karrenbauer and Angela Merkel: The former was seen as the candidate most likely to continue the current German chancellor’s centrist course. Photograph: Matthias Rietschel/Reuters

Germany’s centre-right Christian Democratic Union (CDU) is on the hunt for a new leader after just 14 months as Angela Merkel’s successor announced on Monday she is to stand down.

Annegret Kramp-Karrenbauer announced her decision to the party’s steering committee on Monday amid growing doubts she had authority to hold her party together – or win next year’s federal election.

She will stay on until the summer and begin the process of finding an election candidate who will aim to inherit the keys to the chancellery from Dr Merkel when she stands down in autumn 2021.

Mrs Kramp-Karrenbauer - known to all in Berlin as AKK - was elected in December 2018 but has proven a luckless leader, with even supporters admitting she was proving a difficult sell to voters.

A conservative Catholic from the southwestern state of Saarbrücken, she first made waves at national level in 2015 by suggesting allowing marriage equality could open the door to incestuous or polygamous marriages. In office, she caused a flap during last year’s European elections by appearing to question media freedom as part of a row with a YouTuber CDU critic.

Her time as leader was marked by an ongoing series of regional election disasters. Despite that, and her full-time job of retooling the CDU for the post-Merkel era, Mrs Kramp-Karrenbauer surprised political Berlin last July by becoming defence minister.

She has signalled her wish to retain that portfolio while setting in motion a process of choosing a new CDU leader. That soul-searching process is likely to paralyse Germany politically for months to come, two years after the CDU’s last, months-long leadership contest.

Last year was a political go-slow in Berlin as the CDU’s grand coalition partners, the Social Democratic Party (SPD), indulges in a similar journey of self-discovery, which is still ongoing under a new leadership duo.

But the CDU’s reinvention process is likely to be even more difficult, given the aftershocks of last week’s events in the eastern state of Thuringia. The local CDU party defied Mrs Kramp-Karrenbauer, and disregarded internal party rules, by voting along with the far-right Alternative für Deutschland (AfD) to elect a new state premier from the liberal Free Democratic Party (FDP).

The result triggered an earthquake in German politics, shattering post-war taboos and increasing pressure on the CDU to define its profile in the post-Merkel era. It cost the Thuringian CDU leader his job and now, too, Mrs Kramp-Karrenbauer’s position.

The CDU has always prided itself on its unity, but in recent years two rival camps have grown up in the party – and Mrs Kramp-Karrenbauer a powerless onlooker. A more pragmatic camp, closer to the leader, insists the party should continue Dr Merkel’s centrist path to maximise the CDU’s vote share.

But a rising conservative camp, neglected under Dr Merkel, feels the party needs to shift right to survive. Leading this camp is Friedrich Merz, a Merkel rival who has been circling Berlin in a holding position since losing the leadership to Mrs Kramp-Karrenbauer in December 2018.

He is now likely to make his move and force discussion on a question avoided both by Dr Merkel and Mrs Kramp-Karrenbauer but now forced onto the agenda by the Thuringian vote: how the CDU defines itself vis-a-vis other political parties.

At the 2018 party conference that elected Mrs Kramp-Karrenbauer leader, CDU delegates backed a motion insisting the party should remain equidistant from both the AfD and the Left Party, successors to the ruling East German party.

But the political dilemma this creates has become clear in Thuringia, which for the last five years has been ruled by a stable three-way coalition with the Social Democratic Party (SPD) and Greens and led by a pragmatic Left Party leader.

For many local CDU figures in Thuringia, teaming up with the AfD to prevent another Left-lead coalition was the lesser of two evils.

Elsewhere in the country, the opposite is the case. Nearly a week on, horror and anger still linger at the local CDU’s alliance with the AfD and its leader, Björn Höcke, whom courts have said can be described as a fascist.

Above all Mrs Kramp-Karrenbauer’s premature departure is a humiliation for Dr Merkel. She promoted AKK as CDU general secretary and securing her the party leadership was seen as the chancellor’s final political coup. That coup has gone wrong and could see Dr Merkel sharing power in her last months with her greatest political nemesis: Friedrich Merz. The two were once close allies but have been foes since Dr Merkel, sensing his ambition, fired him as CDU general secretary in 2002.

What’s already clear is the new European term in Brussels is likely to grind to a halt thanks to internal politics in Europe’s largest member state. Just as Ireland’s election result has forced other parties to reassess their policy to Sinn Féin, Germany’s major parties are now being forced to redefine their voters’ expectations, their place in the political landscape and their approach to the growing political fringe.