Mali attack: ‘They came and shot everything that moved’

Over 30 people killed in assault on Ogossagou village, which happened after troops left area 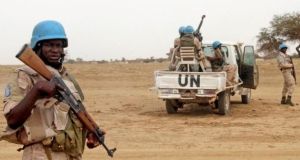 More than 30 people have died in an attack on a village in Mali that was the scene last year of the country’s worst civilian massacre in recent memory.

A government statement late on Friday did not say who carried out the attack on Ogossagou, a village of Fulani herders in the centre of the west African nation.

“They came and shot everything that moved,” said Hamadou Dicko from Fulani association Tabital Pulaaku.

In the attack on Ogossagou in March, suspected militiamen from a rival group killed more than 150 civilians, part of spiralling ethnic and jihadi violence in the vast Sahel region.

Moulaye Guindo, mayor of the nearby town of Bankass, and another local official, who declined to be named, said the latest attack came less than 24 hours after Malian troops who had been stationed near Ogossagou left their base.

An army spokesman said soldiers had been deployed to respond to the attack but did not give details.

Central Malian residents have criticised the army for failing to protect them against violence that has displaced 200,000 people and left many communities with no local government or means of defence.

They have turned to self-defence militias for protection against jihadists and rival ethnic groups though the defence groups have also used their weapons to settle scores.

French forces intervened in 2013 to drive back al Qaeda-linked jihadists who had seized northern Mali the previous year, but the militants have regrouped, stoking ethnic rivalries in central Mali and elsewhere to boost recruitment and destabilise the region. - Reuters