US immigration raids begin on smaller scale than planned 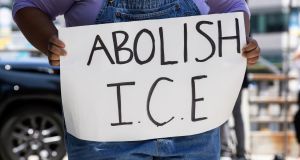 A small number of coordinated federal raids targeting undocumented migrant parents and their children took place in the US over the weekend.

It marks the beginning of the Trump administration’s plan to swiftly enforce deportation orders against some 2,000 recently arrived migrants who are not eligible to remain in the country.

Only a handful of arrests appeared to take place, and they were reported in just a few cities.

That was much different from the nationwide show of force that had originally been planned, in which immigration agents were expected to fan out in unison Sunday morning across immigrant communities in major cities. Authorities said more arrests would follow through the week.

The plans for the operation were changed at the last minute because of news reports that had tipped off immigrant communities about what to expect, according to officials.

Instead of a large simultaneous sweep, the authorities created a secondary plan for a smaller and more diffuse scale of apprehensions to roll out over roughly a week. Individual Immigration and Customs Enforcement (ICE) field offices were given the discretion to decide when to begin, one official said.

Though millions of people live in the United States without documentation and are periodically targeted for deportation, the latest raids are aimed primarily at families from Central America who have been arriving in large numbers since fall. With Mr Trump repeatedly thwarted in his attempts to slow the ongoing surge, the raids aim to deport parents and children who are not eligible to stay in the country - some within months after their arrival - as a way to deter others from coming.

Immigration authorities planned to continue making arrests throughout the week in at least 10 cities. They had identified at least 2,000 targets for the raids, but may ultimately arrest fewer.

Typically, only 20 to 30 per cent of the targets of ICE enforcement are apprehended. And because agents cannot legally force their way in to the homes of their targets, they rely on the element of surprise to be successful - suggesting that the current, highly publicised raids could result in even fewer arrests than usual.

The operation was originally scheduled for late June, but it was postponed after harsh opposition from Democratic lawmakers and immigrant advocates.

Mr Trump confirmed Friday that it would go ahead over the weekend. “They’re going to take people out, and they’re going to bring them back to their countries,” the president said.

“Or they’re going to take criminals out, put them in prison, or put them in prison in the countries they came from.” Mark Morgan, the acting commissioner of Customs and Border Protection, told “Fox & Friends” on Sunday that the operation was intended to enforce the rule of law.