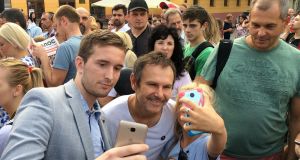 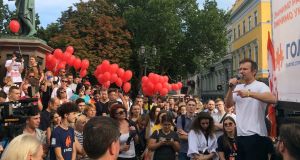 A year ago, two of Ukraine’s most popular entertainers were still busy doing the things that made them famous: Volodymyr Zelenskiy was working on another series of his hit TV comedy Servant of the People and Svyatoslav Vakarchuk released a new single and played before 100,000 fans in Kiev with his rock band, Okean Elzy.

This summer, by dizzying contrast, newly installed President Zelenskiy has visited the leaders of Germany and France and spoken to his Russian counterpart Vladimir Putin, while Vakarchuk criss-crossed Ukraine to help propel his new party into parliament in Sunday’s parliamentary elections.

Their dash onto the political stage has prompted some Ukrainians to hope the pair will join forces for the good of their country, which in the last 15 years has endured two revolutions, Russia’s annexation of Crimea and the current war in the east with Moscow-led separatists.

Both Zelenskiy’s party – also called Servant of the People – and Vakarchuk’s Holos (Voice) are packed with political novices, who promise to bring clean hands and fresh ideas to parliament and sweep away a deeply discredited old guard.

Servant of the People is set to win by a landslide, powered by the desire for change in Ukraine that carried Zelenskiy into office in May, and most polls suggest Holos will take five to 10 per cent of votes in this country of 42 million people.

“I’m enjoying it, I feel good, but it’s not about me,” Vakarchuk said of life on the campaign trail as he strode into Holos’s Kiev office one recent morning, after leading party activists in a protest against Russian propaganda.

“It’s about our whole team of experts and professionals who want to work together to bring positive changes to Ukraine.”

Like almost all of Holos’s would-be deputies, Oleksandra Ustinova (33) is new to politics.

After the 2014 Maidan revolution she quit a comfortable role in corporate communications to join the Anti-Corruption Action Centre watchdog, where she says job satisfaction came hand-in-hand with a big pay cut and a campaign by law enforcement agencies to discredit her using surveillance and fake news.

“We’re not here to make money but to make changes. That’s what we all agreed when we decided to do this,” she tells The Irish Times.

Ustinova met Vakarchuk in 2018, when she was one of three people selected for the Ukrainian emerging leaders’ programme at Stanford University in California. Vakarchuk (44) co-sponsors the programme and was a visiting scholar at Stanford in 2017-18 after spending time at Yale in 2015.

He also has a doctorate in theoretical physics from Lviv University in his native western Ukraine, and sang with Okean Elzy in support of the Maidan protests and the 2004-5 Orange Revolution, after which he served briefly as a deputy before quitting in frustration at the infighting that wrecked hopes of lasting reform.

The son of a former education minister, Vakarchuk’s bookish background contrasts with that of Zelenskiy (41), who earned a law degree in Kryvyi Rih, his hardscrabble and mostly Russian-speaking hometown in Ukraine’s central rustbelt, before building a career in comedy and a successful TV production company.

Moreover, the comedian showed little public interest politics until recently and has been accused of having a vague grasp of policy detail, while the singer has been an activist for many years and gained a reputation for intellectual rigour.

“There aren’t that many PhDs in physics in national politics in Ukraine or in America or anywhere else,” Timothy Snyder, a Yale history professor and expert on eastern Europe, said of Vakarchuk this month on Ukraine’s Hromadske television.

“I knew Slava as a rock star,” recalls Ustinova, using the familiar name that Vakarchuk prefers.

“But when I got to know him, I was amazed at how well he understands the political situation in Ukraine from the inside, and at the connection he has with people when speaking or singing to them. That’s where his energy and power come from.”

For Ustinova, the calibre of Holos’s candidates sets it apart from the bigger Servant of the People, which has been criticised for nominating some characters with dubious backgrounds as it grows rapidly from scratch into a ruling party-in-waiting, while refusing to enlist any current deputies.

Holos has dropped three candidates due to doubts over their connections and says its funding is totally transparent. It returned some €70,000 in donations of unclear provenance and vows to have no dealings with Ukraine’s oligarchs, who have shaped the country by buying political influence since independence in 1991.

In planning to drive these tycoons out of politics, strengthen Ukraine’s anti-corruption agencies and relaunch reform of its criminal justice system, Holos and Servant of the People share top priorities – fuelling talk of a potential coalition.

“So many people who will come into parliament really are completely new faces. This is a unique opportunity that must be used wisely,” says Ustinova.

“We are a party of professionals, lawyers and activists who have done a lot of advocacy and know how laws are passed. Now we are working on draft Bills and deciding which we would submit first... and what has to be in a coalition agreement – if there is one,” she explains.

“We’re not talking about a coalition now but about uniting around certain priorities that are important for us,” Ustinova adds.

Last summer, as speculation swirled over which of the showmen would be the first to plunge into politics, Zelenskiy posted a playful video on social media.

“So Slava – are you ‘yes’ or ‘no?’” he asked, in apparent reference to Vakarchuk’s political ambitions. “Because if you’re a firm ‘yes’ or a definite ‘no’ then so am I... What about you? If it’s you and me, then it’s we. You understand? And if it’s we, then we’ll beat everyone else.”

On the campaign trail in the Black Sea port of Odessa on Sunday, Vakarchuk said it was too early to talk about a possible political alignment of the stars.

“We are ready to work with all forces that support Ukraine’s pro-European path and we won’t join any coalition with pro-Russian parties,” he told The Irish Times.

“Everything else will become clear after the election.”