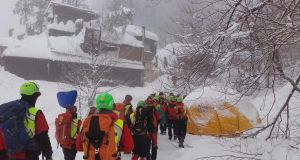 Rescue workers continue to search for the 24 missing people four days after an avalanche hit the Hotel Rigopiano in the Abruzzo region of Italy. Photograph: EPA/Soccorso Alpino

The desperate search for further survivors of last Wednesday’s avalanche at the Hotel Rigopiano in Abruzzo, central Italy, was still ongoing on Sunday night in difficult, snowy, sub-zero conditions.

Buoyed by the fact that since rescue work began on Thursday morning, nine people have been pulled out alive from the buried hotel, the rescue teams still hope against hope that they can save other lives.

By Sunday night, the toll of this tragedy was six dead, nine survivors and 23 still missing. Fabrizio Curci, head of the department of civil protection, told Italian TV on Sunday: “When you are working in conditions like these, you work in the belief that there are still people alive. There is always hope because events like these can throw up the most improbable situations.”

Access to the remote site of the Rigopiano hotel, at the foot of the Gran Sasso mountain, remains difficult with the road barely passable.

While the rescuers have used traditional tools such as sniffer dogs, they have also been helped by metal detectors as well as cell phone location technology of the sort used by police.

Thus far, that police technology saved at least one life, that of Giampaolo Matrone, who, along with his wife, Valentina, was buried under snow and rubble. Speaking to reporters, Mr Matrone recounted how, in vain, he had tried to keep his wife alive: “I held on tight to her by the hand and I kept talking to her because I wanted her to stay awake. I kept on calling her but then at a certain moment, she did not reply. I knew then that she was leaving me . . . ”

Other survivors on Sunday told reporters something of their horrendous ordeal. Giorgia Galassi, who was buried under the collapsed hotel for 58 hours, recounted: “It was frightening, it was dark, we were hungry. We survived by sucking snow . . . The worst moments came on the second day, stuck in a little can with no idea of what time it was . . . and nothing to eat.

“When we heard noises, we began to bang on the ceiling as hard as we could and they called back to us. I immediately screamed, ‘I am Giorgia and I am alive’. It was the most wonderful thing that I have ever said in my life . . . ”

Even before the desperate rescue operations have concluded, however, the public prosecutor’s office in nearby Pescara has opened an inquiry into both possible delays in the rescue operation and also into the potentially illegal building of the hotel itself.

Among the issues that investigators will consider is the fact that Meteomont, the national snow service, rates the area around the Gran Sasso as having a four out of five avalanche danger factor. In short, should the hotel have been built at this remote venue, at the foot of the Gran Sasso, at all?

1 US passengers fly into Dublin: ‘I’m here for six days. I guess I’ll have to stay inside’
2 California shuts down again as US coronavirus cases surge
3 Travel rules unlikely to include mandatory quarantine or cancelled flights
4 White House turns its fire on Anthony Fauci over Covid-19 comments
5 Covid-19: 200 to 250 people arriving in Ireland from US daily - Coveney
Real news has value SUBSCRIBE