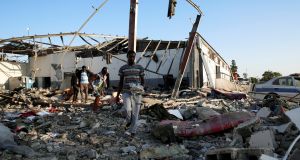 Migrants carry the remains of their belongings from among rubble at Tajoura detention centre in Tripoli on Wednesday, after it was hit by an air strike. Photograph: Ismail Zitouny/Reuters

Refugees and migrants who survived a deadly attack on a detention centre in Libyan capital Tripoli are calling for evacuation, while blaming European Union policy and United Nations ineffectiveness for leaving them unprotected in a war zone.

At least 40 refugees and migrants were killed and many more injured after air strikes hit the migrant detention centre in Tajoura, eastern Tripoli, late on Tuesday night.

One Sudanese detainee in Tajoura told The Irish Times he hadn’t believed what was happening. “I was laughing,” he said, describing his shock turning to terror after the bombing began.

“Libya is not safe,” another detained Sudanese man in Tajoura wrote through messaging service WhatsApp.

“I’m not ok,” messaged a third detainee there. “Our brothers were killed.”

The UN envoy to Libya, Ghassan Salame, said the attack “clearly could constitute a war crime”.

Refugees and migrants detained in Tajoura have been warning for months that they were in serious danger, due to the complex they’re in also being used as a military base by a militia aligned with the Tripoli-based government.

“Right before this accident happened we had informed to the UNHCR, MSF and other human rights [organisations] Tajoura is a [place for storing] war weapons and heavy artilleries, as well as tanks,” said an Eritrean man who spent months in Tajoura before he was evacuated to Niger.

“We told them we are in danger, we had known or expected what happened yesterday night. Nobody understood our problem. A lot of lives have been lost.”

The man, who is in his 30s, said he still wasn’t sure of the identities of those who were killed. “I am worried about my brothers who are still suffering in Libya. It is best to evacuate [them] to [a] safe place as soon as possible.”

In a joint statement, the United Nations Refugee Agency and the International Organisation for Migration – both of which work in the detention centre – said they strongly condemned “this and any attack on civilian life”.

“UNHCR and IOM believe a full and independent investigation is required to determine how this happened and who was responsible, and to bring those individuals to account. Co-ordinates of such centres in Tripoli are well known to combatants, who also know those detained at Tajoura are civilians.”

An earlier strike hit very close to the halls where migrants and refugees are kept in Tajoura detention centre in early May, though only one detainee was injured. Many of the 6,000 refugees and migrants detained indefinitely in Libya were locked up after they tried to reach Europe, but were intercepted on the Mediterranean Sea by the EU-supported Libyan coast guard.

The EU is currently spending tens of millions of euro on equipment and training for the coast guard, as part of a strategy aimed at stopping migration to Europe.

In May alone, more than 1,200 people were caught at sea and returned to Libyan detention centres – far greater than the number being evacuated out to safe countries by the UN Refugee Agency.

“What is needed now is not empty condemnation but the urgent and immediate evacuation of all refugees and migrants held in detentions centres out of Libya,” said Prince Alfani, Medical Co-ordinator with Médecins Sans Frontières, which also works in Tajoura detention centre.

“Today, inaction and complacency has needlessly cost the lives of more vulnerable refugees and migrants.”