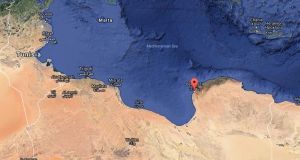 A car-bombing was perpetrated in Libya (above) on Benghazi’s Al Salmani district as worshippers were leaving a mosque after prayers tonight. It was not immediately clear who is responsible. File photograph: Google Street View

A double car bombing in the eastern Libyan city of Benghazi on Tuesday left at least 22 people dead and others wounded, according to officials and a Reuters witness.

The attack was mounted in Benghazi’s Al Salmani district as worshippers were leaving a mosque after prayers. It was not immediately clear who was responsible.

The victims included both military personnel and civilians, officials said.

Benghazi was the scene of more than three years of conflict from 2014 until late last year, as forces loyal to eastern-based commander Khalifa Haftar battled Islamists and other opponents.

Haftar’s Libyan National Army (LNA) claimed control of their rivals’ final holdout in the port city in December. There have been occasional bomb attacks in Benghazi in recent months, often outside mosques.

The fighting in Benghazi was part of a broader conflict that developed in Libya after former ruler Muammar Gadafy was removed from power and killed in a Nato-backed uprising in 2011. – Reuters