Cardinal compares Congo under Joseph Kabila to an open prison 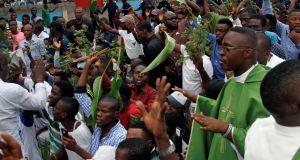 The head of Congo’s Catholic Church condemned the government of President Joseph Kabila on Tuesday for a deadly crackdown on pro-democracy protesters, suggesting his country was becoming like a prison.

Cardinal Laurent Monsengwo has been ratcheting up a conflict between the government and one of the Democratic Republic of the Congo’s most powerful institutions, as the church increasingly becomes a focal point for opposition to Mr Kabila’s efforts to stay in power with no mandate.

Security forces shot dead at least six people and wounded dozens more as they fired tear gas to disperse a protest on Sunday that the Catholic Church had organised, triggering widespread international condemnation.

“We were dispersed by tear gas, stun grenades and live bullets. We have again seen deaths, injuries, priests being arrested, and the theft of citizens’ property,” Monsengwo said at the church in the capital Kinshasa.

A military spokesman did not immediately respond to a request for comment. Mr Kabila’s refusal to step down at the end of his mandate in December 2016 has triggered a series of street protests in which scores have been killed in Kinshasa. It has also emboldened armed rebel groups in different parts of Congo.

“Are we now living in an open prison?”

Congo’s influential Roman Catholic Church has emerged as a flashpoint for opposition to Mr Kabila, while his political opposition remains flimsy and divided.

Sunday’s violence was an echo of similar bloodshed on New Year’s Eve, when Congolese forces killed at least seven people in the capital during a protest by Catholic activists.

Mr Kabila blames delays in an election meant to replace him on logistical problems with registering voters. The vote will not be held until the end of this year at the earliest.

The resulting instability has stoked fears that the vast, mineral-rich country could slide back into the wars that killed millions in the 1990s, mostly from hunger and disease. – Reuters