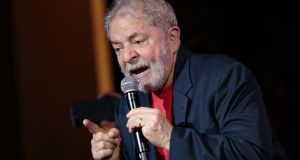 Brazil’s year of political uncertainty gets under way on Wednesday when an appeals court will decide whether to uphold the conviction for corruption of former president Luiz Inácio Lula da Silva.

If the three-man panel in the southern city of Porto Alegre rules against him, Lula will technically be ineligible to hold public office. That would throw the legitimacy of his candidacy in October’s presidential election into doubt.

Porto Alegre will be in lockdown for the hearing, which starts at noon local time. Streets will be closed off and all nearby public buildings shuttered, with authorities promising a heavy security presence after supporters and opponents of the former president promised to mobilise in the city ahead of the ruling.

While asserting their client’s innocence, Lula’s lawyers have demanded the appeal court throw out the conviction by lower court judge and anti-corruption crusader Sergio Moro, which stemmed from a bribery case involving a beach-front apartment.

They argue the alleged crimes are proscribed by the statute of limitations. They have also asked that if the appeals court upholds the conviction, which came with a sentence of 9½ years, that Lula be left at liberty while he appeals his case to superior courts in Brasília.

The appeal judges can quash the conviction or uphold it and even increase the original sentence. In more than 90 per cent of cases it has upheld anti-corruption convictions handed out by Moro, the judge, which stem from the sprawling investigation into wrongdoing at state oil giant Petrobras known as Operation Car Wash.

If Lula refuses to withdraw from the presidential contest despite losing his appeal, Brazil’s so-called “clean record” law, which bars people convicted of corruption from holding office, will face its severest test yet. His lawyers have indicated that even if Wednesday’s decision goes against him, their client intends to register his candidacy while he appeals in Brasília.

Led by Lula’s Workers Party, the left is facing a potential electoral fire-storm, with polls showing it could see its presence in Congress reduced to a rump. The party is desperate to keep its biggest vote getter in the race. Without Lula on the ballot it has almost no chance of returning to power.

The clean record law was signed by Lula himself in 2010 after anti-corruption campaigners gathered 1.6 million signatures to force its consideration by Congress. Politicians have in recent years sought to use injunctions in higher courts to undermine its intent of barring wrongdoers from office.

Brazil’s left has denounced the case against Lula as part of a political witch-hunt, even though dozens of politicians from right-wing parties have also been swept up in the affair. A number of other corruption cases against the former president are still working their way through the legal system, meaning that even if Lula’s only conviction so far is quashed, his ambition to return to the presidential palace still faces legal obstacles.

Without its current front-runner, the presidential race is extremely open, with no other candidate as yet emerging as a strong contender.

Lula’s closest rival, authoritarian former military officer Jair Bolsonaro, saw his prospects hit earlier this month by media revelations that his family’s wealth had multiplied exponentially since his entry into politics, undermining his claim he would clean up Brasília if elected president.