François Fillon accused of misappropriating over €1.1m in public funds paid to his family 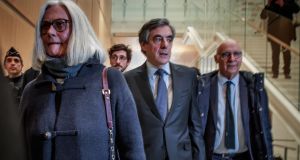 The trial of former French prime minister François Fillon and his Welsh-born wife Penelope on corruption charges was postponed on Monday “out of sympathy” with lawyers who are protesting against threats to their special pension fund.

The trial will resume on Wednesday afternoon.

The courtroom fell silent on Monday as the Fillons entered 20 minutes early for the first day of the trial at the Paris criminal court, dressed identically in dark suits. The couple sat down together, with blank faces.

A few minutes later, they were joined by the third defendant, Marc Joulaud, who replaced Mr Fillon as representative for the Sarthe department from 2002 until 2007.

The short session began at exactly 1.30pm. Mr Fillon’s lawyer, Antonin Lévy, asked that the trial be postponed due to the industrial action of the lawyers, who had blocked the entry to the courthouse until noon.

Mr Fillon became prime minister in 2007 under president Nicolas Sarkozy. He was the frontrunner in the campaign for the 2017 presidential election when the scandal broke, in January 2017. He was eliminated in the first round, when he came third, with 20 per cent of the vote.

Mr Fillon is accused of misappropriating €1,171,400 in public funds paid to his wife and two eldest children as salaries for allegedly bogus jobs as parliamentary assistants. The Fillons are also charged with complicity and possession of those funds. As civil plaintiff in the case, the National Assembly demands the Fillons return the money.

Mr Joulaud is charged with misappropriation of €645,768 in public funds which he paid Ms Fillon during the five years that he replaced her husband in the National Assembly.

The Fillons and Mr Joulaud say they will use the three-week trial to demonstrate that Ms Fillon truly worked for her husband and Mr Joulaud.

The Fillons are also charged with complicity in fraud and possession of the proceeds of fraud in relation to €135,000 which Ms Fillon received from Marc Ladreit de Lacharrière, a billionaire businessman and owner of a respected literary journal. Mr Ladreit de Lacharrière has admitted to having paid Ms Fillon for a fictitious job.

Mr Fillon is also charged with failing to report a €50,000 interest-free loan from Mr Ladreit de Lacharrière to the government ethics committee.

Wednesday’s session will be devoted to constitutional points raised by the defence. These include the statute of limitations and the separation of powers. Defence lawyers claim the judiciary cannot legally judge the internal functioning of the legislative branch.