Slovak anger over graft and cronyism drives out ruling populists 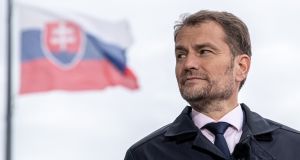 Slovak opposition parties are holding talks to form a coalition government after beating the ruling Smer party in parliamentary elections dominated by anger over corruption and impunity.

The Olano (Ordinary People and Independent Personalities) party won the popular ballot with 25 per cent of votes, on a pledge to end the graft and cronyism that many Slovaks now associate with the centre-left Smer (Direction), which came second with 18.3 per cent, down 10 per cent from its tally four years ago.

Olano leader Igor Matovic said he hoped to forge a ruling majority with the right-wing Sme Rodina (We are Family) party, the liberal SaS (Freedom and Solidarity) group and the conservative Za Ludi (For People), all of which crossed the five per cent threshold to enter parliament.

Mr Matovic ruled out co-operation with Smer, which has run Slovakia for 12 of the last 14 years, or People’s Party Our Slovakia, a far-right, anti-EU party that is hostile to migrants and the country’s Roma minority. It came fourth in the election with 8 per cent, matching its performance in 2016.

This election came two years after the murder of journalist Jan Kuciak and his girlfriend Martina Kusnirova, which led to protests and a political crisis when links between alleged criminals, officials and senior Smer members were exposed.

“It was the death of Jan Kuciak and Martina Kusnirova that woke up Slovakia,” said Mr Matovic. “We take the result as a request from people who want us to clean up Slovakia. To make Slovakia a just country, where the law applies to everybody regardless of whether he is rich or poor.”

A millionaire former media owner, Mr Matovic (46) used a strong central message and skilful self-promotion to attract support from the many Slovaks who feel forgotten by what they see as a greedy, dishonest and out-of-touch political elite.

Critics doubt, however, that the erstwhile opposition maverick has the skill to run an EU and Nato member state of 5.4 million people and the finesse required to manage a diverse and potentially fractious coalition.

Mr Matovic insists his government will focus on bringing improvements to how Slovakia functions and to its people’s everyday lives, without engaging in ideological disputes or the kind of battles with the EU that now dominate relations between Brussels and Poland and Hungary, two of Slovakia’s neighbours.

“I’d like to assure everybody that there’s nothing to worry about,” Mr Matovic said. “We’re not here to fight cultural wars.”

He was expected to hold negotiations on Sunday with Richard Sulik, head of the pro-business and culturally liberal SaS, and on Monday with Boris Kollar of the right-wing, anti-immigration Sme Rodina.

“This should move quickly,” Mr Sulik said of the coalition talks. “There’s no reason to wait.”