Turkey pressing for a ceasefire in Syria’s Idlib province 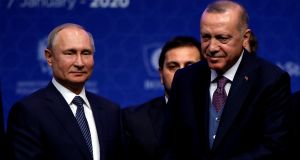 Direct Turkish military intervention in Syria has come at a steep price. On February 27th, a Turkish convoy was targeted by co-ordinated Russian and Syrian air strikes in southern Idlib. Ankara admitted 36 soldiers were killed and 60 wounded, although fatalities may have been much higher.

While Moscow denied its aircraft were involved and Ankara blamed the strikes on Syria, the Al-Monitor news site reported that Russia had cause to attack the convoy. Early that day, Russia’s airbase in Latakia had been repeatedly threatened by bomb-laden Turkish drones, and Russian war planes had to evade Turkish missile fire.

Since the Russian air force has largely reasserted control of the skies over Idlib over the past week, Putin enjoys considerable leverage over Erdogan.

Putin argues Russia’s military involvement in the Syrian conflict is legitimate because it was invited to intervene by the government. He contends that Ankara’s troops were permitted to enter Syria only to monitor the collapsed 2018 ceasefire and de-confliction deal with Moscow, and are now waging war on the Syrian army, risking conflict with Russia.

Putin’s advantage in the air has been strengthened on the ground by the recapture by the Syrian army of the strategic Damascus-Aleppo motorway town of Saraqeb, which had briefly been seized by Turkish-backed jihadis and surrogate militiamen.

The Syrian army has also retaken scores of insurgent-held towns and villages in south Idlib as well as areas in north Aleppo province.

Three Syrian air force planes have been brought down by missiles fired by war planes while Turkish drones have taken a high toll among Syrian and allied troops battling Turkish forces, jihadis and surrogate fighters which have also regained some lost territory.

Direct intervention by the Turkish army has not gone without response from the Kurdish-dominated Syrian Democratic Forces, which have mounted attacks on Turkish troops and clients in the formerly Kurdish-majority district of Afrin, occupied by Turkey in 2018, and against Turkish-captured areas along the border.

While Moscow has discouraged co-ordination between the Syrian army and the Kurds, this is increasing. If and when the Syrian army recaptures Idlib, the Kurds want to mount a joint offensive to drive the Turks and their clients from all Syrian soil.

Meanwhile, on the political front, Russian officials have appealed to the Emirates and Saudi Arabia to support efforts to curb Turkey, which presents itself as a regional rival to both these Arab powers. They have been angered by Turkey’s dispatch of more than 2,000 Syrian fighters to Libya to defend the UN-recognised regime in Tripoli while rebel forces supported by the Emirates and Egypt have been besieging the capital.