President Paul Biya, who lives part of the time in Switzerland, may seek re-election 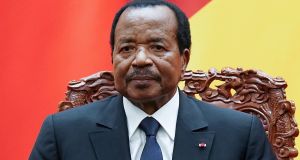 Cameroon’s president, Paul Biya, who has held on to power for 36 years. Photograph: Lintao Zhang via Reuters 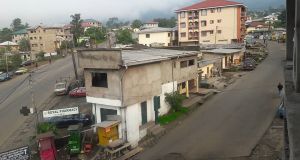 Smoke billowing from fighting in the Mile 17 district of Buea, the capital of a western region of Cameroon, on July 9th. The area is reported to be gripped by violence between separatists and security forces. Photograph: AFP/Getty Images

When the American ambassador took up his post in Cameroon late last year, he stepped into an increasingly troubled nation, locked in battle against Islamic militants in one part of the country and armed separatists in another.

And then there is the matter of its leader. Cameroon has not had a new president since Michael Jackson released Thriller in 1982. Under the 36-year leadership of President Paul Biya, the nation has been accused of numerous human rights abuses, including killing unarmed protesters, torturing detainees, shutting off the internet and locking up journalists.

Last month, Washington’s ambassador, Peter Henry Barlerin, met with the 85-year-old president, who has taken initial steps to seek re-election in October. He told Biya that he “should be thinking about his legacy and how he wants to be remembered in the history books”, saying that George Washington and Nelson Mandela were excellent role models.

The remarks caused an uproar among officials in Cameroon and in the local media, which accused him of trying to influence a foreign election. The minister of foreign affairs summoned the ambassador for a scolding. Barlerin even received death threats.

The ambassador, a career diplomat, noted that his comments were made following a discussion with the president about the need to stop the violence in areas where the military is battling a bloody separatist uprising. “We do not have a preferred outcome for the election,” Barlerin said in a recent interview, emphasising that he has stressed that to government officials. “We want a strong and stable Cameroon.”

The matter seemed to quiet down, temporarily, until late last month when Barlerin’s photo was plastered across the covers of at least three local newspapers, which accused him of paying nearly $5 million (€4.2 million) to opposition candidates in the presidential race.

The US embassy strongly disputed the claim, releasing a statement that described the story as “entirely false”. Opposition members also denied the reports and speculated they had been planted by the president’s supporters, who know the population would be appalled at any foreign attempt to influence elections.

“All this agitation is simply that the officials are looking for the sympathy of the people,” said Hilaire Kamga, one of the candidates running against Biya.

The controversy stirred by the American ambassador is a sign of just how deeply entrenched Cameroon’s current government is. Critics say his loyalists operate with impunity, creating nothing more than a charade of a democracy.

Cameroon has been accused of abusing human rights as it fights the militant group Boko Haram and tries to stop a secession movement being fought by an estimated 1,000 armed rebels who want to create a new, English-speaking nation they call Ambazonia. That conflict, which some analysts fear could spiral into civil war, has claimed at least 425 lives, according to Unicef, the UN children’s agency, and is spilling into new territories.

Amnesty International said last week it had gathered “credible evidence” that an assault depicted in a horrifying video, showing the shooting deaths of several women and infants by men in camouflaged uniforms, appeared to have been carried out by Cameroonian soldiers battling Boko Haram in the country’s Far North region. Cameroon’s military and government officials called it “fake news”.

The storm caused by Barlerin’s remarks about Biya’s legacy is not the first time American diplomats have become entangled in election controversy on the continent. In Kenya during the Obama era, Johnnie Carson, then the top American official for Africa, repeatedly warned during the 2013 presidential election that “choices have consequences”.

His remarks were interpreted as taking sides against one of the candidates, Uhuru Kenyatta, who had been accused of crimes against humanity. Carson’s words seemed to backfire, energising an electorate that voted Kenyatta into office.

Cameroon’s opposition is fractured, and, like in past elections, no candidate with a mass following has emerged. Analysts fear that many voters who most likely would cast a ballot for someone other than the incumbent probably will not be able to vote because of violence that will keep polls from opening.

Some Cameroonians are so fed up with the government they may withhold their vote in protest, said Hans De Marie Heungoup, a Central Africa senior analyst for the International Crisis Group. Some protests could turn violent, he said, and the military has a record of firing on unarmed protesters.

Past elections won by Biya have been called flawed and full of irregularities. Even though victory for Biya seems likely if he formally joins the race, his supporters were still miffed at what they interpreted as an attempt at a foreign government to urge him to step down.

“The American ambassador is not an enemy of Cameroon,” said Saint-Eloi Bidoung, a first deputy mayor in Yaoundé, the capital, and a member of the governing party. “But he should know that the departure of President Biya from power depends solely on the will of Cameroonians, and not from a foreign power, even the United States of America.”

Emmanuel Simh, a founding member of the opposition Movement for the Renaissance of Cameroon, called the ambassador’s remarks “normal diplomacy” and said they caused a stir only because Biya’s supporters are panicked about losing power.

For most of the past few months, Biya has been present in Cameroon, a notable fact for a president who spends considerable time in a hotel in Switzerland. An investigation by the Organised Crime and Corruption Reporting Project found that Biya has spent a total of 4½ years abroad on private trips. During 2006 and 2009 he spent a third of his time out of the country.

Biya was absent in 2016 when a train overloaded with passengers derailed, killing dozens. And last year when protests by separatists turned violent, the president was in Switzerland. Critics call him the President of the Hotel Intercontinental, for his preferred accommodation in Geneva.

The Corruption Reporting Project estimated that Biya has spent $182 million of public money on his private travel. Nearly half of the nation’s population lives below the poverty line. That Biya can spend so much time abroad with few implications at home demonstrates his grasp on power.

Government officials have benefited from Biya’s long tenure. Like many nations in the region, Cameroon is a place of haves and have-nots. Outside Yaoundé, golden painted homes sit atop lush hillsides while beaten-down shacks line the roads at the bottom.

“Ministers,” locals sigh and shrug when asked who lives on the hilltops. Any plans for a post-Biya nation are murky. If he wins the presidency again, Biya would be in his 90s by the end of his seven-year term. If he were to die in office, the Senate president would take over until an election was held two months later. But analysts question whether Biya’s powerful loyalists would stand by idly.

“The institutions there are so weak,” De Marie Heungoup said. Unlike other countries in the region that rely on oil revenues to finance most of their budgets, Cameroon has a more diverse economy that includes agriculture and manufacturing, which allowed it to weather a drop in oil prices better than neighboring Nigeria.

Cameroon is in the middle of an unstable region. Conflicts abound in nearby Central African Republic and the Democratic Republic of Congo, and the region’s war with Boko Haram has spilled across borders. Cameroon has welcomed tens of thousands of refugees from those conflicts and has been a key partner with foreign militaries in fighting Boko Haram.

Barlerin said his office recently had emphasised, as a precaution, to the Cameroon government that the military equipment Americans have provided for the fight against Boko Haram must not be used to fight separatists.

“It’s a wonderful country and we’ve had a lot of good cooperation from the government,” Barlerin said. “I don’t want to see it go up in smoke.” He added: “The only thing we want is for elections to be free, fair and credible and that the will of the Cameroonian people be heard.” – New York Times