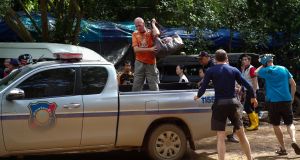 British cave diver Vernon Unsworth gets out of a pick up truck near the Tham Luang cave complex, where 12 boys and their soccer coach were trapped. He played an instrumental part in their rescue. Photograph: Panu Wongcha-um/Reuters

A British cave diver who was instrumental in the rescue of 12 children trapped in a northern Thailand cave says he is considering legal action after the inventor Elon Musk called him a “pedo” on Twitter.

Vernon Unsworth (63) said he was “astonished and very angry” at the attack, for which Mr Musk offered no evidence or basis. The billionaire initially doubled down on the comments made on social media, but has since deleted them.

Mr Unsworth told journalists at the cave site, where a clean-up operation is under way, that the remarks about him were an attack on the entire rescue crew. “I believe he’s called me a paedophile,” Mr Unsworth said. “I think people realise what sort of guy [Mr Musk] is.”

Asked if he would consider taking legal action against Mr Musk, he told reporters: “Yes, it’s not finished.”

Mr Musk was angrily responding to an interview Mr Unsworth gave on Sunday in which he said a child-sized submarine the Tesla chief executive delivered to the cave site last week “had absolutely no chance of working”.

“He had no conception of what the cave passage was like,” Mr Unsworth said in the interview. “The submarine, I believe, was about 5ft 6in long, rigid, so it wouldn’t have gone round corners or round any obstacles.”

In a bizarre series of tweets on Sunday, Mr Musk said he would produce a video proving his submarine would have been able to reach the children and in a comment directed at Mr Unsworth, added: “Sorry pedo guy, you really did ask for it.”

When a Twitter user pointed out that Mr Musk was “calling the guy who found the children a pedo”, the billionaire responded: “Bet ya a signed dollar it’s true.” Both tweets have since been deleted.

Mr Unsworth, who lives in Thailand, was among the first cave divers on the scene in Mae Sai after the boys from the Wild Boars football team and their coach became trapped inside on June 23rd.

Rescuers have said he used his knowledge of the cave system and networks in the cave diving community to marshall a response that was crucial in locating the boys 10 days later, and helping to free them last week.

Mr Unsworth said he had saved copies of Mr Musk’s tweets and believed he had “lost the plot”.

“I have a lot of support from people around the world astonished by his unfounded comments,” he said.

He had had not contact with Mr Musk throughout the rescue operation nor since – a situation he hopes will not change. “I don’t know the guy, never met the guy, and don’t want to meet the guy,” he said.

Mr Musk had already attracted criticism for his approach to the Thai rescue after Narongsak Osatanakorn, head of the joint command centre, said the mini-submarine was sophisticated but not practical for the operation .

Mr Musk responded by saying Mr Osatanakorn was “not the subject matter expert” and that he had been “inaccurately described as rescue chief” and should have been labelled the “former Thai provincial governor”. Mr Osatanakorn stepped down as Chiang Rai governor during the rescue, but had been asked to keep serving as commander.

Mr Musk was intensely criticised on Twitter for the attack on Mr Unsworth. Some users pointed out how “dangerous” and irresponsible it was to make such a serious allegation and to broadcast a potentially libellous insult to his 22 million followers.

James Anderson, a partner at Baillie Gifford, Tesla’s fourth-largest shareholder, told the Guardian in an email: “I intend to convey my – predictable I trust – feelings to the company tomorrow.” He declined to elaborate.

Mr Musk had pledged to be less combative on social media, saying earlier this week: “I have made the mistaken assumption – and I will attempt to be better at this – of thinking that because somebody is on Twitter and is attacking me that it is open season. That is my mistake. I will correct it.” – Guardian