Euskera speakers on the rise, although some see it as politically tainted

Guy Hedgecoe in the Basque Country 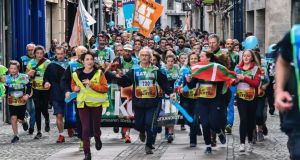 The Korrika race in Bayonne in southwest France is held annually to promote the Basque language Euskara. Alongside the Basque autonomous community, the northern Spanish region of Navarre and southern France also have substantial Basque-speaking populations. Photograph: Nicolas Mollo/AFP/Getty Images

It’s break-time in Lauaxeta school and children of all ages are running, playing, jostling and chatting in its large grounds. This school, or ikastola, is a group of modern buildings set in the green, rolling hills east of Bilbao, near the Bay of Biscay.

Occasionally, students can be heard using the Spanish language but it is the very different sound of Euskera, the Basque tongue, which is more often used, with its hard consonants and multi-vowel combinations.

“We feel that the link to our culture is speaking Basque, that’s where it all came from,” says Iraide Ugalde a 16-year-old female student.

“I know that it’s one of the oldest languages – most other languages come from Latin and ours doesn’t.”

“I feel totally proud to be a Basque speaker and to be Basque because it’s not a common language in the world,” she says, explaining that she grew up speaking the language at home.

All the other students in this school can make the same boast because its classes are almost entirely in Euskera, with a few hours each week of Spanish and English. This almost total immersion in the Basque language ensures that these children have a command of a language whose grammatical complexities often bewilder outsiders and which, having been threatened with extinction just half a century ago, is now flourishing.

A 2016 study carried out by Basque authorities showed that 34 per cent of people in Spain’s Basque region spoke the language, up from just under a quarter in 1991, when the first such statistics were published. That may sound like a modest increase, but an arguably more relevant figure is the number of Basques under the age of 25 who speak Euskera: a quarter of a century ago they were just 25 per cent and now they are over 70 per cent.

“We have witnessed a magnificent change,” the nationalist president of Spain’s Basque region, Íñigo Urkullu, said recently. “Our ‘old language’ has managed to adapt.”

Urkullu will have had in mind the fact that Euskera was banned throughout much of the four-decade dictatorship of Francisco Franco, whose determination to impose a uniform culture on the country included ensuring the use of Castilian Spanish, to the exclusion of regional tongues in areas such as the Basque Country, Catalonia and Galicia.

During that time, Euskera was confined to smaller towns and villages and used cautiously, mainly inside homes.

But by the 1960s, as the end of the dictatorship approached, that policy was less strict. Basque schools, or ikastolas, where Euskera was taught, were created and the language started to enter the mainstream.

“The fact that children could learn Euskera in school, that meant that they could then keep on spreading the language and that’s what happened,” says Errukine Olaziregi, a Basque language teacher. “Today there are two entire generations who can communicate with their children in Euskera. So the school system has been a crucial factor in ensuring its survival.”

The standardisation, at the end of the dictatorship, of a language with many dialects also boosted its use. In addition, the nationalist governments which have dominated Basque politics in recent decades have made Euskera an integral part of the civil service.

The origins of Euskera remain a matter of debate to this day. Its unusual syntax and reliance on a barrage of prefixes and suffixes make it distinct to the Latin-based languages prevalent in southern Europe.

Its mysterious history has given birth to some weird and sometimes outlandish theories, such as the claim by the 17th century historian Esteban de Garibay that Noah’s grandson, Tubal, brought the language to the Basque Country. That notion has long been ruled out, but links have also been made with Caucasian tongues and Berber in North Africa. One theory which seems to have gained ground recently is that Euskera’s roots can be traced to the Aquitaine people of southern France.

Such opponents of the Basque language’s spread have linked it to extreme nationalist politics, such as those of terrorist group Eta

Spain’s so-called Basque autonomous community, a small region of two million inhabitants, sits between the southwestern corner of France and the Bay of Biscay. Yet it is only part of the broader area that nationalists traditionally consider the Basque homeland. The northern Spanish region of Navarre and southern France also have substantial Basque-speaking populations.

But while Euskera has enjoyed a steady resurgence in recent years, it has also been the cause of political discord.

On June 2nd, thousands of people demonstrated on the streets of Navarre’s capital, Pamplona, against what they saw as the imposition of Euskera in the region’s public institutions by the governing nationalist-leftist coalition.

“The Navarre government favours the few to the detriment of the majority – that is discrimination,” activist Ricardo Guelbenzu told demonstrators.

“They want to take control of Navarre’s civil service on the back of Euskera . . . In most jobs, Euskera shouldn’t be a merit, it’s not necessary and it’s not used that much, let’s make that clear.”

Such opponents of the Basque language’s spread have linked it to extreme nationalist politics, such as those of terrorist group Eta, which sought to create an independent Basque state.

But Basque nationalists insist there is room for both Spanish and Euskera and they accused those who led the Pamplona demonstration of using a cultural issue as a political weapon. Koldo Martínez, of the Basque nationalist Geroa Bai party, said that in Navarre, “Euskera has come out of the shadows and many spaces for coexistence between Spanish-speaking and Basque-speaking communities have been created.”

It could be that Euskera will now free itself of such political baggage. This spring, Eta disbanded and the new Socialist government in Madrid appears intent on closing wounds left by the group’s campaign of violence.

Meanwhile, in cities such as Bilbao, Vitoria and San Sebastián, Euskera can be heard mingling with Spanish in bars, museums and universities. The two languages also sit side by side on road signs across the Basque autonomous community, northern Navarre and Basque areas of southern France.

“Beyond being a cultural thing or a museum piece, what we needed was for Euskera to be used in every facet of life,” says Errukine Olaziregi.

“Bit by bit it has gained ground, first in schools and then in the universities, and now it’s heard in all the public institutions, it’s everywhere.”