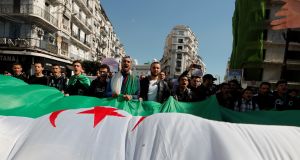 President Abdelaziz Bouteflika’s attempt to quell public anger in Algeria has failed as thousands of people took to the streets on Tuesday to declare that his decision to abandon plans for a fifth term did not satisfy them.

After two weeks of massive anti-regime demonstrations, the ailing president said in a letter read on state television late on Monday that he would not seek another term and would postpone presidential elections scheduled for April 18th.

But thousands of students turned out in the capital Algiers on Tuesday morning to denounce the offer, describing it as an attempt by an opaque regime using 82-year-old Mr Bouteflika as a façade to buy time to install a preferred successor.

Protesters demanded immediate change, shouting slogans such as “not an extra minute Bouteflika” and waving signs including one saying: “This is not a football match. No extra time”.

Zakaria, a student in Algiers, said: “This system has to go. There is no longer place for it in Algeria. It has been driving the country towards an abyss.”

Demonstrations were also held in the eastern city of Constantine and in smaller towns such as Bejaia, Guelma, Boumerdes and Azazga. Algerians had condemned the candidacy of the absentee president as an insult to citizens.

Although Mr Bouteflika was incapacitated by a stroke in 2013 and has not been heard speaking for six years, he vowed on Monday to oversee a political transition to new order. His promises included a national conference to debate political and economic reforms; a referendum on a new constitution; and a presidential election. But they did not add up to the clean break protesters have been demanding.

Ali, another student said: “We will keep the pressure on the regime until they give in. Our demands are clear. The system has to go.”

Analysts said the clique of power brokers who control Algeria – including military chiefs and business leaders – had chosen to keep Mr Bouteflika at the helm because they could not agree on a successor. The national conference, they said, would give them the space to find an acceptable figure to replace him.

Dalia Yazbeck, resident scholar at the Carnegie Middle East Center in Beirut, described Mr Bouteflika’s announcement as “a mini victory for the protesters, but they have not won the war”.

To many Algerians the move was “window dressing”, she said. “But I still think it is a first step and it shows that the protesters were right in their tenacity. The regime has extended its margin of manoeuvre a bit, but they had better act quickly, before the demands broaden even more.”

Emmanuel Macron, the president of France, on Tuesday “saluted” Mr Bouteflika’s decision as opening “a new page for the Algerian democracy”. France had until then remained muted, caught between the need to remain neutral as Algeria’s former colonial power and concerns that the protests might result in bloodshed and stir its large Algerian population.

On Monday Algerian television broadcast images of Mr Bouteflika receiving Lakhdar Brahimi, a veteran diplomat and former Algerian foreign minister, stoking speculation that he could be appointed to head the national conference. The president was also shown receiving Ahmed Gaid Salah, the military chief of staff, in a sign that the leadership of the armed forces remain united behind the regime.

The coming days will show whether the regime has succeeded in reducing the momentum of the protesters, said Nacer Djabi, a sociologist at the University of Algiers.

One weakness in Mr Bouteflika’s plan is that there is no provision in the constitution that would allow him to remain in office beyond the expiry of his mandate on April 28th, Mr Djabi said.

“Citizens want a real rupture with the regime, and not with specific individuals. I think there are youthful forces that will keep protesting,” he added. “But the regime wants to keep Bouteflika in office so they can govern, whether it is through an election or a transition. The main thing is that they don’t want control to escape their hands.” – Copyright The Financial Times Limited 2019