Venezuela: Maduro and Guaido’s supporters return to the streets

Demonstrators champion respective leaders, both of whom claim the presidency 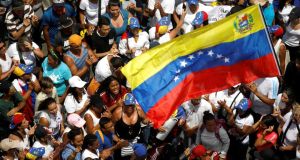 Supporters of Venezuela’s leader, president Nicolas Maduro, and his US-backed challenger, Juan Guaido, returned to the streets again on Saturday amid rising fears the political crisis could be entering a turbulent new phase.

After a strained 48 hours for Venezuela in which almost the entire country was affected by a blackout thousands of demonstrators turned out to champion their respective leaders, both of whom claim the presidency.

“I’m here to support President Maduro – he is the constitutional president of our Bolivarian Republic of Venezuela,” said Maria Reyes, a 52-year-old housewife who was among the crowds at a pro-Maduro rally in central Caracas.

Reyes said she was there to defend Hugo Chavez’s political heir and denounce “the imposter Guaido” as a threat to peace.

Experts blame the massive power cut on poor maintenance, incompetence and corruption. But Mr Maduro’s administration claims it was part of a US plot to destroy Chavez’s leftist Bolivarian revolution and force him from power.

Ms Reyes said she believed that version but was also willing to countenance opposition claims the blackout was caused by government failings.

“Perhaps it was a lack of maintenance. We aren’t ruling any hypothesis out,” she said.

Oskar Oramas, a 24-year-old student activist for Mr Maduro’s ruling Socialist party, said he was protesting about the “escalation of persecution” against his government by the US.

“They want to turn us into another Syria and we will not allow this to happen,” one activist shouted from a red sound truck bearing the slogan: “Here you don’t speak badly of Chavez!”

In cities across Venezuela, members of the opposition poured on to the streets to demand political change amid fears Maduro’s security forces would seek to put down anti-government protests with force.

“They think they can scare us today, but they are going to get a surprise from the people and from the streets,” Mr Guaido tweeted as the demonstrations began.

He is recognised by most western governments as Venezuela’s legitimate interim president.

In a video message to supporters, Mr Guaido added: “They will not get us off the streets until we achieve our liberty.”

Winston Flores, an opposition politician, told reporters: “Caracas and the whole of Venezuela is with Juan Guaido.”

Around him crowds chanted the Obama-era catchphrase his campaign has adopted. “Si se puede!” “Yes we can!”

“They have destroyed a whole country,” demonstrator Jorge Lulo, a psychologist , told the Efecto Cocuyo website as he marched carrying his country’s red, yellow and blue tricolor.

“We are fighting to escape from tyranny.”

He was quickly recognised by regional powers including Brazil, Colombia and the US, and anti-government demonstrations ensued, leaving many convinced Mr Maduro’s fall was imminent.

Those predictions did not come to pass, however, and the opposition challenge appeared to be losing steam.

Last week, however, Mr Guaido made his return to Venezuela after conducting a tour of South America in violation of a travel ban imposed by Mr Maduro’s government.

Efforts to unseat Maduro may also be re-energised by this week’s power cut which left hospitals and homes without power, and reinforced opposition to him.

On Saturday, anti-Maduro marches were also reported in cities across the country including Barcelona, Barquisimeto, Coro, La Asuncion and Puerto Ordaz.

The power outage, which continues to blight large swathes of Venezuela, has also sparked fears that the South American country could enter a period of disorder.