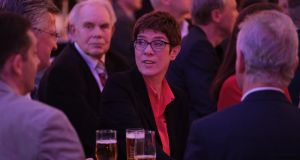 Annegret Kramp-Karrenbauer, leader of Germany’s ruling Christian Democratic Union, agreed with French president Emmanuel Macron that a “European renaissance” is needed. But her reform response leaves open whether this will include renaissance in the bloc’s key Franco-German partnership.

Instead the woman in the running to be Germany’s next chancellor called for a balance between “subsidiarity and individual responsibility”, with the EU standing on “two equal pillars” that balance the traditional “community” method – overseen by the European Commission – as well as the “intergovernmental” method that rose in prominence during the euro crisis.

“European centralism, European statism, communitising debt and Europeanising social security systems and minimum wage would be the wrong approach,” wrote Ms Kramp-Karrenbauer in an opinion piece for the Welt am Sonntag newspaper.

However, she backed the French president’s demand for a sealed Schengen area to boost citizens’ feeling of security.

“Wherever the outer border cannot or should not be protected alone with national means, [EU border police] Frontex has to be expanded quickly and deployed,” she said, proposing an electronic register for arrivals and departure, accessible to all Schengen member states.

The German politician backed Mr Macron’s idea of a European security council but also revived demands for a permanent EU seat on the United Nations Security Council, of which France already is a member.

And Ms Kramp-Karrenbauer suggested the bloc would benefit from abolishing EU “anachronisms” by concentrating activity in Brussels – a swipe at the European parliament’s second seat, defended robustly by successive French governments, in Strasbourg.

For years French officials have fumed at what they see as half-hearted EU engagement by Germany, dubbing Dr Merkel “Madame Non”.

If anything Ms Kramp-Karrenbauer, with an eye on May’s European elections and new far-right eurosceptic rivals, has struck a more strident tone, warning: “There is no version of a European superstate which can live up to the goal of a Europe made up of sovereign member states.”

Ahead of a reaction from Paris, German political rivals poo-poohed the new CDU proposals as lacking ambition and vision.

“A very thin CDU paper on the future of Europe, after a very long silence,” said Michael Roth of the Social Democratic Party, Germany’s minister of state for Europe.