Algerians in capital snub first election since fall of Bouteflika 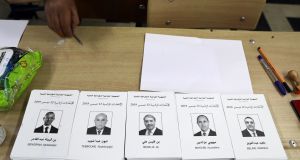 Ballot papers sit on a desk at a polling station in Algiers on Thursday. Photograph: Mohamed Messara/EPA 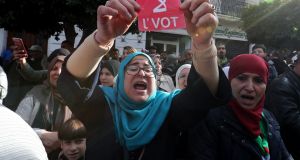 An Algerian woman holds a placard reading in Arabic “No” as protesters marched on Wednesday ahead of Thursday’s election. Photograph: Mohamed Messara/EPA

A thin trickle of Algerians cast ballots in the country’s presidential election on Thursday as police cars filled the centre of the capital, Algiers, and baton-wielding police across the city dispersed thousands of protesters chanting against the regime.

At polling stations in the working-class district of Bab el-Oued, election officials vastly outnumbered the few voters who turned up in the early hours to choose a successor to Abdelaziz Bouteflika, the ailing president ousted by the army in April after weeks of demonstrations against extending his two-decade rule. By midday, in a school in downtown Algiers, only 18 people had cast ballots out of some 370 registered voters.

“It was out of the question to take part in an election to impose a regime nominee,” said Samia Merzoug, a potter, who was marching with hundreds of demonstrators in central Algiers on Thursday morning.

Minutes later riot police rushed the protesters, sending the group scurrying into side streets. Within an hour, the same demonstrators had regrouped, joined by thousands of others in chants calling for a “civilian and not a military state” and accusing the authorities of being “killers”.

Protests were reported in several cities around the country and there was hardly any voting in the Berber-speaking region of Kabylia, according to local news reports. The electoral commission said the turnout rate was 33 per cent by 5pm.

The leaderless protest movement that toppled Mr Bouteflika has continued to stage peaceful demonstrations for the past nine months and denounced the poll as a charade intended to continue military rule behind a facade of civilian leadership.

The Algerian army has been the main arbiter of power in the political system since the country’s independence from France in 1962, choosing presidents and controlling key decisions.

The five contenders running for president are all seen as regime candidates. They include two former prime ministers under Mr Bouteflika, Abdel Medjid Tebboune and Ali Benflis. Algerian analysts say there are signs that the military favours Azzedine Mihoubi, a poet and former culture minister, who heads the National Democratic Rally, which has participated in ruling coalitions since the 1990s.

On the eve of the poll, there were demonstrations in 10 Algerian cities. Ahmed Gaid Salah, the army chief of staff and the country’s de facto ruler, warned of tough action against anyone who sought to disrupt the vote.

Some of those who did cast ballots described voting as a duty. “I want stability in the country,” said Aqila, a shop owner.

Fatma, a retired teacher, argued that the vote would stop foreign intervention in Algeria and prevent a repeat of the “black decade” in the 1990s when the army cancelled an election won by an Islamist party. That intervention sparked an insurrection by armed Islamists and led to violence during which more than 100,000 people were killed.

Gen Salah has insisted that the twice-postponed election must be held, and called on Algerians to vote in large numbers as a demonstration of patriotism. He says it will fall to the new president to introduce reforms.

On Thursday evening, riot police in central Algiers chased a large crowd into narrow side streets, grabbing protesters as they hid behind parked cars.

Nacer Djabi, a sociologist, said he expected unrest to continue after the poll. “The situation could deteriorate unless the new president is able to find a way to start a dialogue,” he said.

“If we go to a new phase with talks and a short-term programme of political and constitutional reforms, it could decrease the pressure. It is hard to imagine matters staying as they are now,” he added. – Copyright The Financial Times Limited 2019