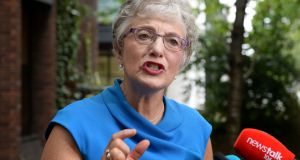 Minister for Children and Youth Affairs Katherine Zappone: “I am deeply concerned that discrimination may be happening at US immigration in Irish airports.” Photograph: Eric Luke

The operation of US immigration pre-clearance at Irish airports must be “urgently reviewed”, Minister for Children Katherine Zappone has said.

Her call comes as several experts in human rights law warn the application at Irish airports of the US ban on people from seven mainly Muslim countries may be illegal.

In a tweet on Sunday, Ms Zappone said: “I am deeply concerned that discrimination may be happening at US immigration in Irish airports and am seeking an urgent review.”

The US embassy in Dublin confirmed the executive order banning the entry of people from Iran, Iraq, Sudan, Libya, Yemen, Syria and Somalia, is being implemented in Dublin and Shannon airports. These are the only airports in Europe providing US pre-clearance.

By Sunday evening there had been no reports of anyone being stopped at Dublin or Shannon boarding a US-bound flight.

A spokeswoman for Dublin Airport Authority said implementation of the ban was “nothing to do with” the authority and was “entirely a matter for the US embassy”.

I am deeply concerned that discrimination maybe happening at US immigration in Irish airports and am seeking an urgent review.

However, Ms Zappone is not alone in calling for a review or suspension of the pre-clearance facility if it means application of the order.

Though US immigration officials operate US law in the pre-clearance areas, Irish officials – including gardaí and Customs and Excise staff – support the operation.

Independent Alliance TD Kevin Boxer Moran said: “The Irish Government must review immediately how the president’s executive order is facilitated at Irish airports. It is my view that there should be no facilitation of such orders.”

Richard Boyd Barrett TD called for an “immediate halt to Irish officials supporting in any way this racist immigration policy” .

Ruth Coppinger TD said the Government must “decide which side it’s on” in relation to the order.

“Will it show solidarity with Muslims who are the targets of this immigration policy or will it turn a blind eye and allow US pre-clearance to carry out racist discrimination in our airports?

Dublin and Shannon are the only airports in Europe that offer US pre-clearance. Its operation in Irish airports results from a 2008 agreement between the US and Ireland, and while it is not part of Irish law, the agreement states: “Nothing in this agreement shall be construed as diminishing the rights enjoyed by individuals under the Constitution and laws of Ireland.”

Humanrights.ie, a site manned by experts in human rights law, in a post over the weekend, said it was “arguable” that application of President Trump’s executive order, on Irish soil, would be “unlawful”.

They say the order is “discrimination based on religion”, and if applied in Ireland would contravene both EU and domestic law.

A spokesman for Taoiseach Enda Kenny, when asked whether there was a concern about the legality of the implementation of the ban on Irish soil, said he would not “get into those kind of details”.