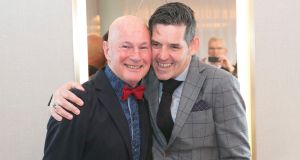 A Catholic priest from Co Clare – who was involved in the first “boat to vote” campaign during the same-sex marriage referendum in 2015 – has married his long-time partner.

At the Armada Hotel at Spanish Point on Friday, 120 well-wishers watched Fr Bernárd Lynch tie the knot with Billy Desmond. There was large applause in the room after the two were pronounced “husband and husband”.

Fr Lynch – who grew up in Ennis in the 1950s – became the first Catholic priest in the world to have a civil partnership when the two men became civil partners in 2006.

The eight-page booklet for Friday’s ceremony was entitled, Our Right to Love is our Right to Justice – Billy and Bernárd.

At the ceremony, a proclamation was read out paying tribute to Fr Lynch “for being a a tireless advocate for the right of lesbian, gay, bisexual and transgender (LGBT) people for more than 30 years as an out gay and proud Roman Catholic priest”.