20 healthcare workers from the Belfast Respiratory Team have released a video calling on people to stay at home to help limit the spread of coronavirus. Video: Belfast Health and Social Care Trust/Reuters 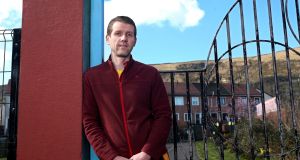 Burdened by the Troubles and deprivation, Upper Springfield in nationalist west Belfast, including Ballymurphy and Turf Lodge, has rarely trusted authority.

“Many people would have a suspicion of orders coming from above. It’s what we refer to as a healthy disrespect for law and order here,” say Ciarán Mac Giolla Bhéin.

However, today a disrespect for authority can be dangerous to life when it comes to heeding public health warnings to stem coronavirus.

Responding to the crisis, residents have set up Ar Scáth a Chéile, a community group offering advice and guidance between neighbours. The name of the group comes from an Irish proverb meaning that we all live in each other’s shadow.

“We have a very rich history of self-organising, not sitting back and waiting on those in authority and those in power to come to our rescue. More often than not in our own history, that has never really happened,” Mr Mac Giolla Bhéin said.

With links to GAA clubs and other social groups in Springfield, Ar Scáth a Chéile quickly realised it needed to amplify the messages about health and social distancing.

“Our concern [was] that the very important messages around social isolation and people keeping their distance probably weren’t reaching and permeating through the community in the way that they should. We needed to deliver this message ourselves, and make sure it’s heard right across the board,” he said.

Even though people were isolated, people said they felt they were a part of something

The 100-strong group is adopting a “holistic” approach, according to Ellen Cahill. Parents are sharing recordings of themselves reading bedtime stories, along with educational and exercise videos, while a family art competition is encouraging people to decorate their windows.

So far, 500 pictures have been entered, with most houses in the area involved. “Even though people were isolated, people said they felt they were a part of something,” said Ms Cahill.

Cliodhna Tolan was sitting at home taking care of her daughter (3) and sister (4) who were bored, when she saw the family art competition announced on a local Facebook page. “It gave them a bit of an understanding about having to wash their hands properly,” she said.

“My neighbour put her pictures on her windows as I was doing mine, and we were waving at each other. It lifted the spirit of the community,” Ms Tolan said. The model may be followed elsewhere in Belfast.

Over the past fortnight, players and volunteers from local football club, St James Swift, have made lists of all those in the area who may need help in the weeks ahead.

We will introduce a nightly call to each elderly resident in our community. A brief chat to see how things are going

“We have a list of pensioners who can’t go out of the house, and who don’t have family. We call on their houses once a week, volunteers leave their phone numbers, prepare to get them gas, food, electricity,” said Joseph McCall, the club’s manager.

Lying on an interface (where nationalist and unionist areas meet), St James Swift, which was set up in 2010 to help tackle social deprivation, has responded to calls for help across the community divide, including the loyalist areas of Shankill and Tigers Bay.

“We open our doors to anyone, it doesn’t matter creed, colour or religion. At times of need, we have to look after people,” Mr McCall said.

Over in Ardcarn in unionist east Belfast, the local community are also making preparations for what is to come.

So far, 12 volunteers in Ardcarn are helping Gareth Wright, who leads the local residents' committee. “We will introduce a nightly call to each elderly resident in our community. A brief chat to see how things are going, and to establish their needs,” he said.

“They are so dedicated, are really putting themselves out there, right on the frontline,” he added.

Councillor John Kyle of the Progressive Unionist Party who has been active as a politician and GP in east Belfast for decades, said local churches, resident groups, even restorative justice organisations were coming together.

However, street level action is happening more in economically deprived areas than in better off parts of the city. Middle class communities “have more of a cushion to protect themselves”, he said.

Paramilitary organisations still exist in east Belfast. Some are “self-serving criminal gangs”, according to Mr Kyle. Others are on “an arc of transformation”.

There is a community spirit emerging. And that is beyond the normal religious and political divides in Northern Ireland

“Those groups are making themselves available and are joining with other churches and groups to support the community,” he said.

Linda Ervine heads Turas, an Irish language group that “aims to connect people from Protestant communities to their own history with the Irish language”.

Some 250 students are enrolled in classes, which normally take place at the East Belfast Mission on the Newtownards Road. Last Monday, the classes were stopped.

Now, though, Turas is moving online with a Saturday morning class through Skype: “There is real enthusiasm. The learners are so glad that somebody is going to be keeping in contact with them, that they are going to be able to continue with their learning. That’s very heart-warming for us. We might have to do things in a different way, but we are still here to help,” she said.

“There is a community spirit emerging. And that is beyond the normal religious and political divides in Northern Ireland. We need to park our differences and look after our community – all our communities.”