What happens if Covid-19 shuts off the Irish emigration safety valve?

The outlook for Ireland’s young people is particularly bleak 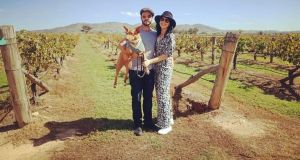 Jamie Fitzcarlos and Steve Fitzcarlos with their dog, Rua. There were due to come home from Australia this month to set up a craft brewing operation, but have had to put those plans on hold.

By now, Jamie Fitzcarlos and her Australian husband Steve Fitzcarlos should have been settling into their new life in Ireland, expanding their nascent brewing operation, reconnecting with family, finding a home. But they were stopped in their tracks by the Covid-19 pandemic, as they were “pretty much about to board the plane”.

Fitzcarlos moved to Australia as a backpacker 15 years ago and stayed, until a health scare in 2017 made her consider more seriously the prospect of return emigration. “It made me rethink what I wanted to be doing in the long-term. And that was to be home, closer to my friends and family. I think as Irish people we always yearn for home, there’s something about it that just draws you back.”

The drift away from, and back towards, home is deeply embedded in the Irish psyche. Since the Famine, emigration has been both one of our major social problems and most reliable economic solutions. It is both a fissure in Irish society, and a safety valve. When times are bad, people leave; when times are better they, like Fitzcarlos intended to, frequently come back.

In the year to April 2019, 26,900 Irish people came home from abroad. That same year, 54,900 people – both Irish and other nationalities – left the country, the lowest figure recorded since 2008. Both were signs of confidence in the economy.

Now it is safe to assume 2020 will see the emigration figure plummet to a new low, even though we are also on the cusp of a prolonged period of unprecedented economic upheaval. For the first time in a century, we are facing into a major recession without the safety valve of emigration. What does it mean for our future economy and society? What will it mean for the younger people who might have emigrated in the past and now cannot? What are the implications for employment sectors such as healthcare and food production if inward migration stutters?

“Emigration has been just a remarkable feature of the Irish economy. You could go back to the Famine to relate [the] fluctuations in the Irish economy to outward movement,” says Prof Alan Barrett, chief executive of the ESRI.

In the past, emigration meant “there was almost like an upper limit on how high unemployment in Ireland would go. If unemployment were to go up in Ireland relative to the UK, Irish people would always spill over into the UK,” says Barrett.

“The economics of this relationship are very clear. It has been a fundamental part of the working of the Irish economy. What’s different this time is you have this incredible international synchronising of the economic downturn.”

Throughout history, “once employment rates and wage rates between Ireland and the UK start differing, there is a movement of people”.

It is a phenomenon that has occurred in roughly 30-year cycles and is tied to periods of economic hardship. “It happened in the 1920s, 1950s, 1980s, and then the 2010s,” says Prof Mary Gilmartin of Maynooth University.

During earlier phases of emigration, remittances provided an economic lifeline.

These trends have given rise to a theory, says Gilmartin, that “the conservatism of Irish society could be connected to the patterns of leaving and staying”.

Now that 30-year cycle has been smashed by the global coronavirus pandemic, the exit route is gone – not just to the UK, but everywhere else. The impact of that will be seen in unemployment figures in the first instance, Barrett predicts. “During the last recession, unemployment topped out at 15 per cent. This time around when you see those forecasts that employment could top 20 or 22 per cent, that’s partly what it’s based on.”

The knock-on effects of this are hugely significant. The longer the crisis continues, the longer people are out of work, with no opportunity to travel abroad and keep their skills up, the more difficult it will be for them to secure employment in the future.

The other significant impact will be on those graduates who, even in good times, spent a period outside Ireland for lifestyle reasons, or because they wanted to take advantage of opportunities in other countries, with long-term benefits to their career. “For people who are going to graduate this year or next year, that’s one of those choices they’re just not going to have,” says Barrett.

The harsh reality, he says, is that “if you graduate at the time of a recession, it can actually have really long-term effects on your career trajectory. That’s a pretty depressing thing to be thinking about”.

The outlook for Ireland’s young people is particularly bleak. In March, the youth unemployment rate, including those on the pandemic payment, rose to 34 per cent for the 15- to 24-year-old age group. The analysts at Carraighill, a financial consultancy which advises international hedge funds, estimate that if the lockdown goes on for a year, youth unemployment could rise to 52 per cent.

Compounding the issue is the fact that younger people are more likely to work in the sectors worst hit – “pubs, hotels, tourism-related ventures and events”, points out Cliff Taylor, managing editor with The Irish Times.

In a worst-case scenario, says David Higgins, analyst at Carraighill, “youth unemployment in the UK could be as high as 45 per cent, with a similarly high level across the euro zone. There is nowhere to turn for young Irish people looking for work abroad”.

Over the coming months it will be increasingly “important to be imaginative around those age cohorts who are less vulnerable to the disease, particularly given that millennials have been hit twice in 10 years by serious economic shocks”, suggests Prof Brigid Laffan, director of the Robert Schuman Centre for Advanced Studies at the European University Institute (EUI).

“We as a society should try to get younger people back to work sooner, if it’s possible. The longer this goes on, the worse it is in terms of employment and career patterns.”

Even if there are better employment prospects elsewhere, international travel restrictions post the pandemic might mean getting a visa to places that are recovering more quickly – possibly Australia, New Zealand and Singapore – is difficult. However, Barrett believes, “some countries may just be in a better position to ensure that when you get off the airplane, you can be tested and quarantined”. It could mean a scenario like a modern-day Ellis Island, where people have to go through rudimentary health checks before they are allowed to enter a country.

The vista of a generation of trapped, disaffected young people, with no opportunities at home and little possibility of travelling abroad, raises troubling prospects for the future political landscape of the country. Could Ireland prove a fertile ground for the far-right populism that has so far failed to gain a foothold here?

During times of economic hardship, anti-migrant sentiment has tended to rise across Europe. However, Prof Martin Ruhs, chair in migration studies and deputy director of the Migration Policy Centre at EUI, does not expect that to happen on a wide scale. “What could be different about this crisis is that if there’s a lot of public awareness and public discourse about the contribution that migrants make in dealing with the emergency, this might counteract some of the negative attitudes to immigration.”

The other major impact of the crisis, in terms of the movement of people, will be on inward migration.

This crisis gives us the opportunity to re-evaluate the work done by essential workers from abroad, who are often lower paid and left with precarious employment situations, Ruhs believes. One of the pivotal moments of the pandemic was the image of the UK prime minister, Boris Johnson, standing on the steps of Downing Street after he was released from intensive care, thanking the two nurses who had stayed by his bedside all night – both of them migrants.

“What Covid has done is shine a light on the fact that many of the workers providing these services are actually migrant. We’re not only talking about highly skilled migrants like doctors or even nurses, we’re talking about cleaners in hospitals, we’re talking about farm workers, people working in the care sector. The one question that people always ask during a crisis like this is whether or not the domestic labour supply to these sectors will go up”, as job opportunities in other sectors contract, and the supply of migrant workers dries up, Ruhs says.

Based on past trends, he suggests, that won’t happen. “There isn’t an awful lot of evidence that domestic workers will return to those sectors in large numbers unless some of the market conditions and structures of the sectors change.”

One unanticipated consequence of the pandemic is that it has sparked a debate about conditions in the sectors of the economy that are reliant on migrant workforces, as happened here in recent weeks, after Keelings flew fruit pickers from Bulgaria. Ruhs believes the crisis has offered an opportunity to address those issues.

Jamie Fitzcarlos, like everyone else, is in a waiting game. Her emigration plans are on hold until April 2021. “It’s hard re-adjusting when you’ve been preparing to say goodbye to your life here [in Australia] after so long.”