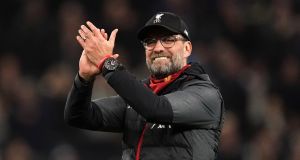 Liverpool manager Jürgen Klopp: “I feel I am in sensationally good hands. And I find it a pity if other people lack this sense of security.” Photograph: John Walton/PA

A while ago Daragh Curley, a schoolboy from Co Donegal, was in the news when it was revealed that he, a Manchester United football fan, had written to Jürgen Klopp, the successful manager of Liverpool United, asking him to lose a few games and give his Man U a chance.

Klopp replied, wishing Daragh well, but explained that he could not let his team lose as that would disappoint Liverpool fans.

The fact that Klopp, a renowned sports personality, replied speaks well of the man.

Last year he faced a much more difficult situation leading up to Liverpool’s European Cup final. Dave Evans, a Liverpool fan, living in New Zealand, had hoped to be in Madrid for the game but sadly could not travel because he had been diagnosed with terminal cancer.

Klopp, who is German, heard of this shortly before leaving for the game and contacted Evans by video using his best English: “Hi Dave, Jurgen Klopp here from Liverpool here in a moment like an hour before we leave to Madrid. I heard about your story and of course it is something really difficult to take it even for me but of course you . . . I wish you from the bottom of my heart all the best and I’m Christian so see you.”

With those words – I’m Christian so see you – Klopp shared his Easter faith with a dying man. He explains: “To be a believer, but not to want to talk about it – I do not know how it would work! If anyone asks me about my faith, I give information. Not because I have claim to be any sort of missionary. But when I look at me and my life – and I take time for that every day – then I feel I am in sensationally good hands. And I find it a pity if other people lack this sense of security – although they don’t know it, of course, because otherwise they would probably look for it.”

When Jesus came to his disciples after the resurrection they were hiding in a locked room; these, the friends who had betrayed him, denied him, who hid when he was arrested and ran away when he was dying.

They must have felt ashamed. Yet when Jesus greeted them, he did not accuse them: “Where were you when I needed you? You let me down.”

Instead he said “Peace” and in that one word reassured them, gave them the security Klopp talks about.

That encounter between Jesus and his disloyal followers assures us that there is no need to hide from the God, who is love no matter how we may have failed in the past.

Jürgen Klopp spoke about his faith when he responded to that poor man in New Zealand but as Fr Henri Nouwen saw at the funeral of a Donegal farmer, words are not always necessary: “The priest and a few men carried the humble coffin to the cemetery. After the coffin was put in the grave, the men filled the grave with sand . . . Two men stamped with their boots on the sod, so it was hardly possible to know that this was a grave. Then one of the men took two pieces of wood, bound them together in the form of a cross, and stuck it in the ground . . . No words, no solemnity, no decoration. Nothing of that – but it never has been made so clear to me that someone was dead, not sick but dead, not passed away but dead, not laid to rest but dead, plain dead. When I saw those two men stamping on the ground in which they had buried their friend, I knew that for these farmers of Donegal there were no funeral home games to play. But their realism became a transcendent realism by the simple unadorned wooden cross saying that where death is affirmed, hope finds its roots.”

That cross said what was needed.