Thinking Anew – Showing what it means to care 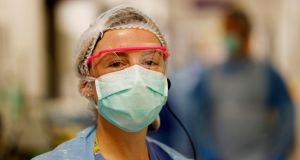 There is some irony in the fact that at a time when religious gatherings are understandably forbidden, tomorrow’s readings see togetherness as an essential part of church life.

The passage from Acts 2 tells us: “All who believed were together and had all things in common; they would sell their possessions and goods and distribute the proceeds to all, as any had need. Day by day, as they spent much time together in the temple, they broke bread at home and ate their food with glad and generous hearts, praising God and having the goodwill of all the people.”

The gospel reading from St John chapter 10 implies togetherness with Jesus as the good shepherd who “calls his own sheep by name and leads them out...”

For the first centuries of its existence the church had no buildings so the eucharist was celebrated in the homes of people.

In the age of lockdown, we are denied even that for the moment but thanks to modern technology and the hard work of clergy and others, efforts are being made to keep people in touch by means of online religious services.

For many years, of course, RTÉ has facilitated the broadcast of religious services, and these have been important for the housebound and those in hospital.

It is said that the first ever religious service to be broadcast live was transmitted in 1924 from London’s famous church of St Martin in the Fields.

Westminster Abbey and St Paul’s Cathedral had declined the offer because the religious establishment at the time thought it would be wrong to transmit divine worship over the airwaves, as “people might listen in pubs with their hats on”.

The Rev Dick Sheppard, vicar of St Martin’s at the time, and later Dean of Canterbury, was delighted to receive a letter saying that people in one London pub had tuned in. Not only had they sung hymns, but they had discussed his sermon over their beer.

St Martin’s is named after the third bishop of Tours who is said to have met a beggar wearing very few clothes near Amiens on a cold winter’s day. Martin, who would later be named as patron saint of beggars, cut his own cloak in two and gave half to the man.

The London church that bears his name began providing shelter to the homeless in the 1920s and today claims to be one of London’s busiest homelessness charities, supporting people through specialist services, including a day and night centre, finding employment, and specialist mental health and addiction support.

As we experience what it means to be isolated and deprived of physical contact with those we value, perhaps we can better understand what it means to be permanently isolated in what we would think of as normal times – the troubled, the homeless, the sick with addictions, the immigrants.

Acts reminds us that those early Christians believed it was their duty to provide practical help to such people: “they would sell their possessions and goods and distribute the proceeds to all, as any had need” – a part of the Christian package often neglected today because it is too demanding.

Responding to human need is demanding not only materially but also emotionally and spiritually as we see in the heroic work of staff at all levels in the healthcare system as they confront a terrible disease that threatens all.

Believer and unbeliever alike showing what it means to care, to follow the rule of Jesus Christ.

Kathryn Spink, friend and authorised biographer of Mother Teresa, explains what this means in her book Chain of Love: “Compassion asks us to go where it hurts, to enter places of pain, to share in brokenness, fear, confusion and anguish. Compassion challenges us to cry out with those in misery, to mourn with those are lonely, to weep with those in tears . . . When we look at compassion in this way, it becomes clear that something more is involved than a general kindness.”

The something more is love.