‘I lost friends over there but you can’t cry over it, you just have to keep going’ 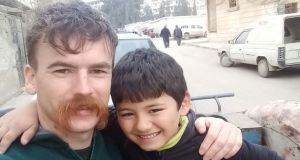 Morgan Mansfield in the city of Afrin, Syria with a local child. He saw “terrible things” during his time in the war-torn country, including a family bombed while trying to flee.

A Waterford man has spoken of his experience as an armed volunteer in the Kurdish-led resistance fighting Islamic State in Syria.

Morgan Mansfield hails from the Waterford Gaeltacht area of An Seanphobal and left for the Middle East in May 2017. But prior to departure for the war-torn country he prepared over several months for the ordeal.

“I was serious about it from January and stopped drinking and started boxing to get fit. I went over then in May. You go initially to a city called Sulaymaniyah in Iraq . . . I was in a hotel the first night, then the next day I went to a safe house,” he told RTÉ Raidió na Gaeltachta.

He told his family initially he was going to Germany but when he reached Syria he informed them he was in Greece helping refugees. “ I didn’t want them to be worried,” he said.

After spending a fortnight in Sulaymaniyah, Mansfield was brought across the border into Syria where he began military training.

“All the arms, they were Russian. My Kalashnikov was from 1970, almost 50 years old, but it was working great.You have to use a Kalashnikov when you’re fighting. Isis don’t care about anyone; you don’t get a second chance with them, you have to take the chance yourself . . . the first rough battle I was in, one man almost died. He was very lucky; he got a bullet in through his stomach and out the other side,” he said.

Mansfield said he had little experience of handling weapons apart from scaring crows with a shotgun. His unit was stationed in the dessert outside Raqqa, then in a city called Manbij and subsequently Mansfield trained as a paramedic.

“We were on the front lines in the city. There were casualty points for people that needed to be sent to hospital. So lads would be bleeding, if you could stop the bleeding they’d have a good chance. Or if they got a bullet in the lungs, there was a special piece of plastic . . . so if you do those two things you can help. You don’t have to be a professional paramedic,” he recalled.

He saw “terrible things” during his time in Syria, including a family bombed while trying to flee.

Mansfield said the family was driving down the road in an old car when a plane launched an air strike on the vehicle. The children were injured and traumatised, but survived. “It’s not nice to see that,” he said.

“I lost friends over there but you can’t cry over it, you just have to keep going.”

Reflecting on his time spent in Syria he said community spirit is much stronger among the Kurds than it is at home.

He returned home last summer and a film about his experience will be shown in the Dungarvan cinema on Wednesday, May 15th.