Trócaire aid worker made enormous difference to the most deprived people 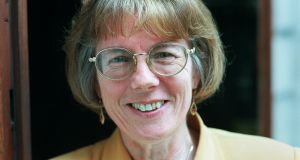 Sally O’Neill ‘brought us to the rubbish dumps in San Salvador at 6am in the morning where the bodies of those murdered were dumped’, President Higgins recalled at the service. Photograph: Frank Miller

Trócaire aid worker Sally O’Neill was described as a “remarkable worker for justice” by President Michael D Higgins, at a memorial Mass in Maynooth, Co Kildare on Friday.

The long-time overseas charity worker was killed in a car crash last month in Guatemala.

President Higgins, a friend of Ms O’Neill, said she had made an “enormous and positive difference to the lives of so many,” in particular those most deprived and disenfranchised.

Ms O’Neill had worked for Trócaire for almost four decades, and had retired in 2015.

The charity worker often placed herself “right at the front line during some of the most significant of global humanitarian crises,” President Higgins said.

The memorial Mass, held in Saint Patrick’s College chapel, Maynooth, was attended by Ms O’Neill’s siblings, and her daughter Xiomara.

“She was the greatest gift that Ireland gave to the Latin world in contemporary times,” President Higgins said.

“Sally did not just speak of how we should treat our fellow citizens with dignity and respect, she showed so many how to do it,” he said.

While a TD in 1982, Mr Higgins was part of an Oireachtas delegation that was guided by Ms O’Neill in El Salvador, investigating reports of a massacre in the village of El Mozote.

“She brought us to the rubbish dumps in San Salvador at 6am in the morning where the bodies of those murdered were dumped,” President Higgins recalled at the service. The subsequent report detailed evidence of a massacre of civilians, and drew international media attention.

Bishop of Clonfert John Kirby, former chairman of Trócaire, delivered the homily and described Ms O’Neill as the “embodiment” of the attitudes and ideals of Trócaire.

She played a key role in organising the charity’s response to the Ethiopian famine in 1984 and the Somalia famine in 1992, and later led Trócaire’s Central America programme, he said.

“Sally was very close to women in the many communities and villages where Trócaire worked. The women would come out to greet her and she would hug them and laugh with them,” Bishop Kirby said.

Ms O’Neill also helped those in Ireland “see poverty and disaster not as natural or inevitable, but the results of decisions taken by the powerful and the wealthy,” he said.

Bishop Kirby expressed his sympathies to Sally’s husband Roger, and her other children Rhona and Roger, who were unable to attend the service.