Bertie Ahern: 20 years on from State apology to survivors of abuse

‘The effect of apology I had underestimated. I did not think it would mean as much’

On May 11th, 1999 the then taoiseach, Bertie Ahern, apologised on behalf of the government to the victims of childhood abuse in State institutions. Two decades on he reflects on the outcomes of the inquiries that followed. 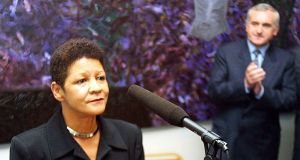 The late Christine Buckley with Bertie Ahern: She had “a very clear view about the importance of the State’s responsibility and the apology.” Photograph: Charlie Collins

Looking back, former taoiseach Bertie Ahern remains convinced the apology he offered on May 10th, 1999, to those held in religious-run institutions was “absolutely necessary”. But he did not expect it to cost so much.

“These people, their live s had been ruined. They had suffered,” declares Ahern, who believed at the time that compensation would cost €500 million at the most, not the €1.5 billion it eventually did.

His actions were influenced heavily by the late Christine Buckley, who spent her childhood and more in the St Vincent’s Industrial School in Goldenbridge in Dublin and later led the Aislinn survivors’ group.

Describing Buckley as “a very articulate, very nice person, but a formidable lady”, Ahern says she had “a very clear view about the importance of the State’s responsibility and the apology. She was very anxious I would do that.”

In his speech, Ahern offered “a sincere and long overdue apology” to the survivors of childhood abuse “for our collective failure to intervene, to detect their pain, to come to their rescue. All children need love and security.

“Too many of our children were denied this love, care and security. Abuse ruined their childhoods and has been an ever-present part of their adult lives reminding them of a time when they were helpless,” he then declared.

Twenty years on, Ahern remembers: “The effect of the apology I had underestimated. I did not think it would mean as much to the people both at home and abroad.”

Its timing had been a long time in preparation.”My interest in this went back about four years earlier. I represented at that stage, following the 1992 election, the Inchicore area in Dublin.

“I had groups, small groups initially. I remember meeting one of the groups in the Glen of Aherlow bar [on Emmet Road] on a Monday where I heard the stories first. And then I met up with Christine.

“You did not have to be educated, or qualified in any of the sciences to see these people had been broken from the traumas they had suffered,” Ahern recalls.

However, the State apology, he insists, was not forced by Mary Raftery’s three-part television series, States of Fear, which brought the institutions’ history into every Irish home.

“[It] had little to do with the apology,” he claims now, “Micheál Martin [then minister for education] had been working on [it] for several months before the series, though the programme was a huge issue at the time.”

Thinking back to the compensation agreements made with the religious institutions, Ahern insists that ministers had acted for the best, but he believes, too, that the institutions are duty bound to honour pledges made.

“Governments did these deals in good faith and I don’t believe either my government or Brian Cowen’s government [in 2009] were being unduly unfair on them.

“So I think they were duty bound to honour them and honour both of them. Honour what was negotiated in both cases,” he says, though he defends the controversial deal made by then minister for education Michael Woods in 2002.

“I think Michael Woods was being as sympathetic as he could be to the religious because he wasn’t trying to take assets that he believed that they required for other purposes.

“So the religious had not been ungenerous to the State down through the years, and to hospitals and all the other organisations. So I thought that [2002] was a fair deal,” he goes on.

The State had obligations to the children for whatever religious “did or didn’t do” in the institutions: “The State was giving them to these religious institutions because the State didn’t have centres run by the State.

Following the 2002 deal, critics argued that the State should have taken more church lands, though those same critics were slow to identify individual plots: “Though, looking back, you would say we didn’t get a lot,” he says.

“I was not interested in doing that. I was interested in trying to resolve this. There were people who were strongly anti-church, who mainly showed very much their view of it being an anti-church and anti-religious view.”

However, Ahern says he had “not anticipated” that the compensation paid by the State since would run so high: “It was not considered that it would be enormous.

“I didn’t think that there was going to be a campaign by legal people that put ads in Australia and Canada, America, and almost invite people to forward applications, which is what happened.

“I’m not too sure how much I agreed with that at the time. It was what happened and that grew the numbers and I know as a constituency politician that people who had short terms in an institution, or who had even very failed memories of time in an institution, came forward and received very large compensation. I suppose from experience in these things once you set them up you find it hard to control them,” he said.

To read the full transcript of the interview, click here.