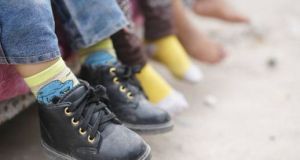 Of the 2,000 to 3,000 undocumented children living in the State nearly seven out of 10 were born in Ireland. Photograph: Getty Images

Research released on Wednesday shows that of the 2,000 to 3,000 undocumented children living in the Statenearly seven out of 10 were born in Ireland. Many of them having been in the country for more than 16 years, according to a Migrant Rights Centre (MRCI) report.

The centre said the Government needed to introduce a straightforward pathway to residency for undocumented children and young people who have grown up in Ireland but are unable to access third-level education.

The study of more than 100 undocumented parents who have raised their families in Ireland found nearly a third of undocumented children were under the age of nine, while more than a quarter were over 18.

Undocumented children spend an average of five years in the Irish school system, while nearly 10 per cent have spent a decade in Irish education.

Undocumented young people find it difficult to move on to third-level education after Leaving Cert, primarily for financial reasons but also because they do not want to declare their status.

“All these young people want to progress and study, they’re valuable. This isn’t even about citizenship. This is recognising that children and young people are growing up here but cannot study and work,” said MRCI spokeswoman Maireád McDevitt.

“The lives of these children have been put on hold, and it becomes all the more apparent when they transition into adulthood.”

The Growing up Undocumented in Ireland report found 78 per cent of those born abroad have lived here more than five years.