Former Green leader speaks of property and morality at conference 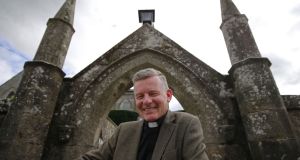 In Ireland “both church and State have baulked at confronting the idolisation of private property”, former Green Party leader Rev Trevor Sargent has said.

This was “notwithstanding the constitutional facility to balance the right to private ownership of land with the pursuit of the common good”.

He recalled the 1973 Kenny report which “proposed the option of compulsory purchase by local authorities of land needed for housing with an extra 25 per cent on top of the agricultural price. Almost 50 years on, we have had no action on these lines,” he said.

Rev Sargent, who was ordained a Church of Ireland priest last September and is now serving in Waterford city, was speaking on the topic of Religion in Community and Public Life at an Irish Association conference in Dublin on Tuesday.

Beginning his address, he said “I just want to thank the people of Dublin North for giving me the opportunity to pursue my vocation when I lost the election in 2011 . . . I thank them every day.”

He criticised religion in Ireland for focusing so much on issues of personal morality, “whether we get into discussions about divorce, abortion, sexuality.

“The amount of column inches that occupy those elements of religious activity and religious belief and conviction are hugely unbalanced compared to an equally strong biblical code which values social justice, human rights, intergenerational responsibility and the humility that come with asking God’s help in stewarding this wonderful creation,” he said.

This church focus “on the body being holy and not land has left a legacy in public life”, he said. He recalled how over recent decades the difference in the price of development land compared to agricultural land made some landowners very wealthy through the rezoning of farmland for house building.

“I experienced the cut and thrust of this as a member of Dublin County Council in the early 1990s. The resulting land prices directly affect the prices, the rent and indeed the unaffordability of housing for many ordinary people,” he said.

He asked, “does this disparity between the price of building and farming land serve the common good?”

What it had done was create “a market for long-distance commuter housing” which “aside from the toll this takes on personal health” had “wider unhealthy consequences in terms of air pollution, greenhouse gas emissions and resource depletion caused by mass manufacture automobiles”.

Commenting on the Government’s Climate Action Plan, he said it was “untested” and expressed concern at responsibility for its implementation resting with the Department of Finance, which “derives revenue from the continuing use of fossil fuels”.

He pointed out, for instance, that 60 litres of fuel currently cost a motorist €83, of which €53 went to that department in tax while the carbon tax was about €3.

Where the climate issue in general was concerned, he said, “I believe in miracles. The Good Friday [Belfast] Agreement was something of a miracle. As a member of the Oireachtas Prayer Group after the IRA 1994 ceasefire, we prayed and met many times with paramilitaries and victims of violence from all sides and none. I believe our prayers were answered.”

In his view, “once enough of us believe we can overcome our addictive dependency on fossil fuels and enjoy simpler lives, then a momentum will build, just as it did for civil rights under the leadership of Rev Martin Luther King in the USA”.