Undocumented in Ireland: ‘I feel as Irish as they come’

Rashmi is one of an estimated 2,000-3,000 undocumented children and young people living in Ireland. 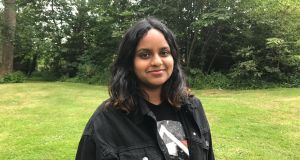 Rashmi, one of an estimated 2,000-3,000 undocumented children and young people living in Ireland. Photograph: MRCI

Six years have passed since Rashmi sat her Leaving Cert in 2013. Unlike her friends, she has not progressed on to third-level education or found a job. Her status as an undocumented migrant meant that once she completed secondary school, her education came to an abrupt standstill.

The 24-year-old, who was born in Sri Lanka but moved to Ireland when she was eight, first realised she was different to her peers during her school’s transition year.

“There were trips abroad and that’s when I first saw this obstacle, that maybe I wasn’t the same as everyone else. I didn’t know anyone else going through the same experience as me, so it wasn’t something I felt I could speak to friends about. You just don’t know how people will react and what kind of consequences would come of it,” said Rashmi, who was willing to be photographed but did not wish to disclose her surname because of the uncertainty surrounding the legality of her residency status.

When she was in sixth year Rashmi filled out her CAO form along with her friends, knowing that she would not be able to accept any offers from universities. Since finishing her Leaving Cert she has completed a PLC course in legal studies and recently reapplied through the CAO to study law in the hopes that the Government would introduce some form of regularisation for undocumented young people.

She plans to study human rights law so she can help others who are, like herself, facing barriers and restrictions in relation to visas and education. Last week she received offers to study at DCU and UCD, but she will most likely not be able to accept them, in part because she would have to pay the fees of an international student.

Four years ago Rashmi joined Migrant Rights Centre Ireland’s (MRCI) Young, Paperless and Powerful campaign for undocumented young people, where she finally met others like herself.

Today she is publicly calling for the Government to provide such individuals with a pathway to residency.

“Since 2013 I’ve had to put my life on hold. I’ve lived like this for so long that I feel like I don’t have a choice anymore other than to speak about what’s happening.”

After 16 years living in Ireland, Rashmi considers herself Irish. “I have family who are Irish, I have friends here, I don’t consider anywhere else as home. The fact that I’m Sri Lankan is a part of my life as well, but this is home. I feel as Irish as they come.”

Undocumented children have spent an average of five years in the Irish school system, while nearly 10 per cent had spent a decade in Irish schools. Once an undocumented young person has completed their Leaving Cert it becomes almost impossible for them to continue their studies into third level.

Undocumented migrants are people who have entered a country legally – often with a work or study visa – but who remain on after these visas expire. In 2017 John Deasy was appointed special envoy to the US Congress to support the estimated 10,000-15,000 Irish undocumented in the US and highlight concerns over immigration policies under the Trump administration. However, the Government has not shown the same level of support for the estimated 20,000-26,000 undocumented people living and working in Ireland.

In September 2018 the Government announced a scheme to regularise the status of former international students who had become undocumented and came to Ireland between January 2005 and December 2010. While MRCI welcomed the scheme as a “sensible move” that had the potential to change many lives, it expressed concern that the application period for the scheme was too short for everyone affected to come forward and that the fee of €700 would be too expensive for many. It is not yet clear how many people were regularised under the programme.