‘That is not Tullamore’: Locals voice support for plan to house asylum seekers 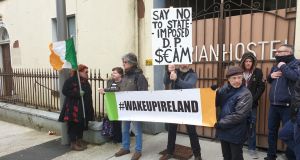 A small group of protesters gathered in Tullamore on Saturday. Photograph: Gearoid Keegan

A small group gathered in Tullamore on Saturday morning to protest against a direct provision centre.

The protest, which was organised on social media, attracted about 25 people to High Street in the Co Offaly town, where up to 168 asylum seekers will be accommodated in four buildings.

The Marian Hostel, which until 2015 was a residence for single working women run by the Sisters of the Blessed Sacrament, will provide most of the accommodation. Protesters stood at its main gate.

While some of the protestors were from Offaly, the majority had travelled from other parts of the country.

Daithí­ Ó Fallamháin, an Irish Freedom Party candidate for Mayo who received 246 first preference votes in the general election, said he had come from Westport to support local people who he believed were opposed to the centre.

“They weren’t happy that they weren’t consulted. And of course the Government never consults because they’re afraid of what the answers might be,” he said.

“I know some people say only local people should be allowed to speak on this. But the politicians aren’t local and the people they’re bringing in won’t be local and once they’re here, they’re here for ever.

“Even the ones who fail the asylum process stay, they don’t deport them. It’s a national issue, I’m here to support Irish people wanting to support their own destinies here.”

Mr Ó Fallamháin, who is an Irish citizen and has Irish parents but was born in the US, said he did not believe in freedom of movement and his party’s primary goal was to leave the EU.

Directly across the street from the protestors, a number of local people gathered and voiced their support for the direct provision centre, including two sisters from Tullamore, Mary Evans and Stephanie McDermott.

“I don’t recognise anyone from Tullamore here and the ones here are giving Tullamore a bad name. It’ll be seen all over the country and people may think that Tullamore is racist and unwelcoming,” said Ms Evans. “That is not Tullamore. Tullamore is a friendly place, a great place to live.”

Ms McDermott said she was “appalled” at the protest and was angry when she saw one of the protestors with the national tricolour.

Ms McDermott said she supported the establishment of a “welcome group” in the town for the asylum seekers.