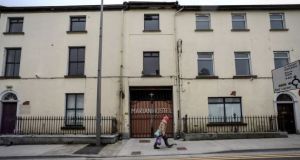 Marian Hostel in Tullamore, which is due to become a direct provision centre for refugees and asylum seekers. Photograph: Crispin Rodwell

A protest against the direct provision centre set to open in Tullamore in March is scheduled to take place this Saturday in the Offaly town.

The demonstration, which is due to kick off at 11am, was announced on the recently established ‘Tullamore says NO to Inhumane Direct Provision’ Facebook page.

The page does not specify where in Tullamore the protest is taking place and it remains unclear how many people are planning to attend.

The online platform, set up on February 21st, follows a recent trend of similar Facebook pages which have appeared over recent months in response to the proposed opening of direct provision centres and emergency accommodation hubs for asylum seekers around Ireland.

The first of these online forums, ‘Oughterard says NO to inhumane direct provision centres’ launched in September 2019 and today has 2,900 members.

The Tullamore page, which features a stream of racist, anti-immigrant rhetoric and ‘Ireland is for the Irish’ posts, currently has 371 members.

A number of these members have called in recent days for the name of the Tullamore group to be changed, saying their main concern is the arrival of asylum seekers in the town, not conditions in centres.

Many posts on the page appear to come from people living outside Tullamore including a number from abroad. One woman, who according to her Facebook page lives in Australia, called on the people of Tullamore to “stand together and show we won’t be beaten”.

“If we don’t come together and show how we truly feel, we will lose and they will come flooding in,” she wrote.

Despite this online negativity, local Fianna Fáil councillor Tony McCormack told The Irish Times last week he did not believe Tullamore would see protests like those in Oughterard, Achill and Rooskey and that he had already spoken to a number of people eager to join the welcoming committee for the centre.

The Department of Justice confirmed last week that a contract had been signed with Bridgestock Care to use the Marian Hostel, a former hostel run by nuns in Tullamore town, as a direct provision centre.

The first residents - nine families from a variety of countries - will arrive in the centre in March with the rest arriving on a phased basis. Up to 168 adults and children will be housed in both the hostel and in three properties located beside it and across the road.

The Department has said that in line with new standards for direct provision being rolled out across the State, the centre will provide “independent living” facilities to residents. Residents will have their own cooking facilities and an onsite food hall where they can get groceries.