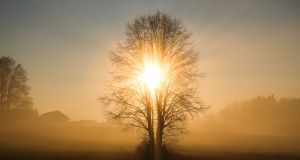 “We cannot always share another person’s spiritual experiences. Indeed, we are often more likely to question them if they are outside our own experience or comfort zone.” Photograph: iStock

When we see something amazing like a beautiful sunset or go to a special family event like a wedding, we often try to capture the occasion with photos and videos. A personal adventure of a few years ago – paragliding from a 6,000m peak in Turkey – was recorded on a video at the time yet in no way does it capture the excitement or the emotions of the occasion: the anticipation, the nervous hesitation and that amazing first leap into an unknown. While the thrill and excitement could be described to friends afterwards in some measure, the reality was non-transferable. It was over and done. That can be true also for religious experience. We cannot always share another person’s spiritual experiences. Indeed, we are often more likely to question them if they are outside our own experience or comfort zone.

In tomorrow’s gospel we read about that strange event called the Transfiguration: “Jesus took with him Peter and James and his brother John and led them up a high mountain, by themselves. And he was transfigured before them, and his face shone like the sun, and his clothes became dazzling white.” As the event unfolds, the disciples are aware not only of the presence of Jesus but also of Moses and Elijah, pillars of the Jewish faith and ultimately God himself. Peter wants to freeze the moment; he could not imagine a better place to be, but his desire is overtaken by events. He and his companions must come down from their spiritual “high” and face the everyday world.

It is tempting to dismiss religious experiences of this kind but Carl Jung, the celebrated Swiss psychiatrist and psychoanalyst, urges caution in his book Psychology and Religion: “Religious experience is absolute. It is indisputable. You can only say that you have never had such an experience, and your opponent would say: ‘Sorry, I have.’ And there your discussion will come to an end. No matter what the world thinks about religious experience, the one who has it possesses the great treasure of a thing that has provided him with a source of life, meaning and beauty and that has given him a new splendour, to the world and to mankind. He has pistis (the personification of good faith, trust and reliability) and peace.”

This is an important affirmation of the benefits of religion at a personal and social level and it is arguable that the current decline in religious practice is a factor in the troubled uncertainty of contemporary society. For the Christian, however, the Transfiguration points to the stability of the divine reality we call God who has been experienced by countless people down the centuries. Carl Jung is one such: “Christ in us and we in Him! Why should the activity of God and the presence of the Son of Man within us not be real and observable? Every day I am thankful to God that I have been allowed to experience the reality of the Divine Image within me.”

At the end of their Transfiguration experience the disciples “saw no one except Jesus himself alone”. They had to leave the mountain top experience and come down to earth as it were to face the challenges of everyday living, but they did so in the company of the ever-present Jesus.

For Christians the accompanying presence of Jesus is affirmed in a special way in the Eucharist. That has been the case since two disciples travelling along the road to Emmaus on the first Easter Day were joined by someone they did not immediately recognise. They were troubled after what seemed like the disastrous events of Good Friday but they offered the “stranger” hospitality. It was then we read that Jesus made himself known in the breaking of bread and it has been that way ever since. The promise made by Jesus is the promise kept: “I am with you always, to the end of the age.”