‘Material things are not important to me,’ says Higgins 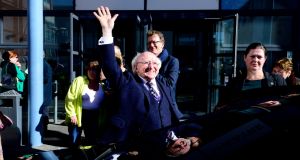 President Michael D Higgins at the announcement of his arts initiative at the Civic Theatre in Tallaght. Photograph: Cyril Byrne

“Material things are not important to me,” President Michael D Higgins said on Thursday when asked about Joan Freeman’s inclusion of him among the millionaires contesting this election.

Fellow presidential candidate Ms Freeman had made the comment on Virgin Media One’s debate hosted by Pat Kenny on Wednesday night. Mr Higgins said he had respect for her work but was “not really interested in trading insults with her”.

The debate next Tuesday would be “an opportunity, I hope, for us simply to accentuate the positive,” he said.

One of the biggest tests facing the next president of Ireland will be in addressing remaining years of the Decade of Centenaries to 2025, Mr Higgins said.

It was “a bigger challenge” than marking recent centenaries “from the Lockout right through 1913 on to 1916 and afterwards,” he said.

In Derry recently to mark the 50th anniversary of the October 5th civil rights march, he had such centenaries in mind, “and the different contests for historical construction there,” he said.

How do you address such events even when people who took part “have different versions of them? That’s going to be a big test,” he said. “Whoever will be president, that will be one of the challenges they face,” he said.

On the tone of the presidential campaign to date he “made a decision very early on that I have respect for my relationship with all of the candidates and I hope that is happening”. For most of his political life he was “in a minority”, “so you learn respect in that,” he said.

But, he felt it important to emphasise “that we have a good turnout so that then when you have finished the entire exercise, whoever it is, will have straight mandate.”

As to his use of a Learjet to fly to Belfast on May 29th last, where he delivered a lecture at Queen’s university, he said it was “the only way I could in fact do it in time”. It also followed consultations with the PSNI.

Mr Higgins was speaking at the Civic Centre in Tallaght where he had just launched his second presidential initiative ‘Samhlaíocht agus an Náisiún: Imagination and the Nation’. It focuses on the role of art and creativity in the shaping of Ireland’s past, present and future.

This latest presidential initiative sought “to highlight and nurture the powerful role of art and creativity in the evolution of Ireland as a real republic,” Mr Higgins said. “Imagination has been central to both the creation and redefinition of Irish identity throughout our history, from the Abbey Players of 1916 to contemporary street art,” he said.