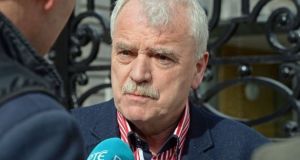 Minister of State for Disability Issues Finian McGrath called on the NTA to have a “meaningful and extensive consultation” with the disabled and the elderly. Photograph: Eric Luke

Changes to Dublin’s bus network under a €2 billion overhaul show a disregard for the disabled and elderly, Minister of State for Disability Issues Finian McGrath has warned.

In seven separate submissions to the National Transport Authority (NTA) on the controversial BusConnects plan, the Independent Dublin Bay North TD criticises proposals in it as unnecessary, unfeasible and unconscionable.

In one letter, sent in his official capacity as Minister, he said he is “not getting the sense from studying the proposals that there were any prior or meaningful consultations with disability groups such as the Disability Federation of Ireland or Inclusion Ireland or others”.

The planned replacement of the current Dublin Bus numbers with a lettered system was just one “small example of a BusConnects proposal which may feel to many as an inconsequential change but to some it could be a major life challenge and quite distressing”, he wrote.

“Learning the number of a particular bus and the time that it arrives can be very challenging for people with intellectual disabilities, but can be a major benefit for these individuals who use public transport to try and live independent lives,” said Mr McGrath.

A central tenet of the plan, which took 16 months to prepare and has already cost almost €3 million in consultancy fees, is that some commuters will lose their direct route and have to change from one bus to another.

US-based consultant Jarrett Walker, who led the design, believes this system will allow more Dubliners to get to more destinations quicker.

But Mr McGrath told the NTA that “transferring from one mode of transport to another can be very challenging for many with disabilities including those in employment as well as our elderly and again this needs to be taken into account”.

Writing separately as a TD, he said BusConnects shows a “disregard and lack of understanding for the realities of the daily transport needs” of the elderly and disabled in Artane, Beaumont, Whitehall, Drumcondra and Donnycarney.

They “are often being asked to transfer more than once to reach hospital, post office and local retail shopping facilities” under the plans, which are currently being revised after a public consultation.

“The areas mentioned above are not being serviced well by the present BusConnects proposal,” he wrote.

It would also mean “hospital users, many of whom are elderly” in Fairview, Marino, Clontarf, Killester, Donnycarney, Whitehall, Collins Avenue and parts of Drumcondra would no longer have a direct service to Beaumont Hospital.

The proposal to remove the direct Beaumont Hospital bus service “from such a vast area as outlined is unconscionable” and “reveals a major oversight”, wrote Mr McGrath.

In another case, the planned removal of the 104 bus route will mean students who can currently travel between Clontarf and DCU in neighbouring northside Glasnevin will in future have to journey into the city centre and take a bus back out again.

Mr McGrath called on the NTA to have a “meaningful and extensive consultation” with the disabled and the elderly and their representatives before making “major revisions” to the plan.

In a blog post, Mr Walker said there is “an unavoidable tension between senior and disabled needs – which are much more inconvenienced by interchange – and everyone else.

“A network designed solely around senior/disabled preferences for minimum walk and interchange is simply too slow to be useful for the rest of the population,” he wrote.