Report by Clare sister claimed such abuse took place in 22 countries, including Ireland 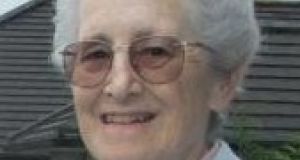 Sr Maura O’Donoghue, a Medical Missionary of Mary from Kilfenora, in Co Clare

Reports last week Pope Francis said the Catholic Church has faced a persistent problem of sexual abuse of nuns by priests and even bishops, seem to have taken many people by surprise.

Speaking to reporters on the flight back to Rome from his trip last Tuesday it was the first time Pope Francis publicly acknowledged the issue, although it is not new.

Catholic nuns have accused clerics of sexual abuse in recent years in India, Africa, Latin America and in Italy, and a Vatican magazine last week mentioned nuns having abortions or giving birth to the children of priests.

Indeed, 25 years ago an Irish nun prepared an extensive report for the Vatican on just such abuse of nuns internationally by priests. It was shelved.

As reported by colleague Joe Humphreys in his 2010 book God’s Entrepreneurs: How Irish Missionaries Tried to Change the World, Sr Maura O’Donoghue, a Medical Missionary of Mary from Kilfenora, in Co Clare, “conducted a groundbreaking inquiry (the findings of which were suppressed by the Vatican) into priests’ alleged sexual abuse of nuns in more than 20 countries.”

The existence of Sr O’Donoghue’s 1994 report emerged in 2001 when, as reported in The Irish Times, then Vatican spokesman, Dr Joaquin Navarro-Valls, acknowledged that “the problem is known about” but insisted it was “restricted to a certain geographical area” (understood to mean Africa).

The Holy See was dealing with the issue in collaboration with bishops and the heads of religious orders, he said.

Sr O’Donoghue prepared her report in 1994 after spending six years as Aids co-ordinator for the London-based Catholic Fund for Overseas Development (CAFOD). She had spent over 45 years of her missionary life in Africa.

On February 18th, 1995, she briefed Cardinal Eduardo Martinez Somalo, then prefect of the Vatican’s congregation for the religious life, on its content.

In her report she linked the alleged sexual abuse of nuns in Africa to the Aids epidemic there, where it was considered the sisters were less likely to have the virus.

She quoted one religious superior who was approached by priests requesting that sisters be made available for sex. Refused, the priests said they would have to go to local women and could get Aids.

She referred to a 1988 incident in Malawi where leaders of a women’s congregation were dismissed by a bishop when they complained that 29 nuns had been made pregnant by diocesan priests, and reported another case where a priest took a nun for an abortion during which the sister died. He officiated at the nun’s requiem Mass.

Her report was based on information supplied by priests, doctors and trustworthy others, and she had been assured records existed for several of the incidents.

Contacted by The Irish Times in May 2001, the Catholic Church in Ireland said it was not aware of allegations of the type having been made concerning Irish missionaries at home or abroad.

However the Irish Missionary Union, which represented Irish missionaries abroad, called on nuns who have been or were being sexually abused by priests to speak out.

The late Sr O’Donoighue was one of four children of Andrew and Katherine O’Donoghue. Both of her parents came from Lickeen, near Kilfenora Co Clare. Her father, Andrew was in charge of the North Clare IRA Brigade during the War of Independence. After secondary school in Mountmellick, she entered the Medical Missionaries of Mary in Dublin and studied medicine at UCD.

In 1958, she went to Nigeria where she worked in a hospital and made her final profession there a year later. In 1959 also she was appointed to the General Council of the Medical Missionaries of Mary. For a period she was Regional Superior of Europe for the MMM congregation.

She would spend 14 years in Ethiopia where, in 1984, she helped co-ordinate the Famine Relief Programme.

She began working with Catholic Agency For Overseas Development (CAFOD), the official aid agency of the Catholic Church in England and Wales, and from 1986 was responsible for the HIV-AIDS desk on their behalf, a position that took her to 83 countries.

She returned to Ireland in 2003 and worked with vulnerable people who had been trafficked from eastern European countries.

In 2011 she was awarded the Clare Person of the Year Award by the Clare Association in Dublin “in recognition of her courageous work among the sick, the vulnerable and the marginalised, mainly in Africa.”

She died at the Medical Missionaries of Mary motherhouse in Drogheda on May 6th, 2015.