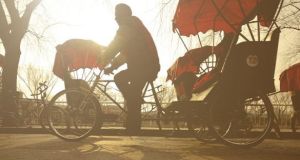 Operators of rickshaws and members of the public who use them are being asked to submit their views as part of a public consultation on regulating the trade.

The National Transport Authority on Tuesday published an online survey seeking the views of users in relation to their experience of rickshaws, including charges and any issues they may have experienced.

Existing rickshaw owners are also asked to fill in the survey to outline the scale and type of their rental operations, and operators and drivers are being asked for their comments on their work experience and methodology.

Members of the public are asked to submit their views on whether and how rickshaw operation might be regulated.

This preparatory work and research will inform the drafting of new legislation in the area, the NTA said.

In June, Dublin City Council issued a safety warning to the public over the use of rickshaws in the city centre.

It said rickshaws operating in the city were not regulated and it warned that “some rickshaw operators appear not to have public liability insurance”.

Currently, rickshaws are treated as bicycles under Irish law, and rickshaw drivers are not required to have public liability insurance.

The Department of Transport is considering regulating the vehicles under the Taxi Regulation Act 2013, which would bring in certain standards and requirements for drivers.

Deputy chief executive Hugh Creegan said: “Earlier this year, Minister for Transport Shane Ross asked the NTA to seek the views of the public and key stakeholders in relation to the operation of rickshaws in Ireland.

“The regulation of rickshaws has been a matter of public interest for some time now and the information we gather in this process will bring some clarity to bear on how the relationship with regulatory authorities will be defined into the future.”

Mr Creegan encouraged anyone with an interest in the area to share their views “so that we can work towards the most appropriate regulatory regime”.

He said the survey was “intuitive, easy to navigate, and very user friendly”.

The majority of the questions are optional.

While the survey is seeking the views of members of the public, organisations, rickshaw owners and rickshaw drivers, representative organisations and bodies are encouraged to provide any further, considered submissions directly to the NTA.

Following the review, the transport authority will consider the responses and formally respond to the department.